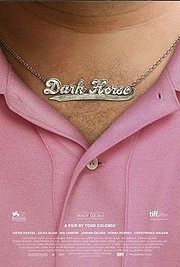 Abe (Gelber) likes to think of himself as a ‘dark horse’ rather than a ‘frontrunner’. An unkind observer, however, might be more inclined to think of him as a lame duck – he lives with his stifling mother (Mia Farrow) and sour father (Christopher Walken), who employs him as a bean-counter of some sort. “I work for my dad, but it’s not nepotism or anything like that!” insists Abe, who spends the 9-5 ignoring his spreadsheets and shopping for vintage Thundercats figurines on eBay. His brother’s the big success of the family – nobody seems to expect Abe to do any more with his life than antagonise the staff at Toys’R’Us and cream his mother at backgammon.

As we meet him, however, Abe is in the process of meeting someone himself. Miranda (Blair) is the only other non-dancing guest at a wedding they both attend, setting up the now-traditional Solondz opening scene of stilted conversation at a dinner table. Abe shamelessly inviegles himself into Miranda’s life by virtue of completely refusing to take a hint, and on their first ‘date’ (he turns up at her house, semi-invited; she passes out from overmedicating) he takes the distinctly non-traditional step of proposing. God only knows if Miranda will say yes, but Abe starts to make plans nonetheless – could this introverted, damaged girl be just what he needs to finally sort his life out? Or is everything going to fuck up all over again? Probably the latter, if we’re honest. The highlight of Dark Horse is unquestionably its central performance. Jordan Gelber is captivating as the troubled Abe, whose tragedy is bound up in an inability to see his own myriad failings – he sees himself as several cuts above the rest of the “fucking cesspool” that is the world, and behaves with the easy arrogance of an absolute ruler despite having all the charisma and presence of a set square. Miranda’s palpable lack of interest in him doesn’t even slow him down. “I want to want you,” she mumbles through a haze of tranquillisers. “That’s good enough for me!” replies Abe, grinning like an idiot. More of Jordan Gelber, please – with any luck Dark Horse will do for him what Solondz’ 1998 film Happiness did for Philip Seymour Hoffman.

One great performance, however, does not a film make. Solondz has left the unremittingly dark ensemble comedies which made his name behind to make this a relatively kind film which is very much about one man, and that one man isn’t enough to carry Dark Horse on his own. It’s not that Gelber is surrounded by crap actors, just that the rest of the cast is more or less uniformly underwritten – there are juicy moments, sure, but this is just not a consistently watchable film. Christopher Walken and Mia Farrow are absolutely wasted as Abe’s parents, and I would have paid through the nose to see more of Donna Murphy as the thrillingly enticing cougar Marie. Rather than dwell on these characters and others in any sort of meaningful way, Solondz crawls steadily farther up his own arse as he subjects the viewer to baffling dream sequences and hallucinations, forcing the actors out of character to such an extent that it’s as if you’re not seeing them play the same roles at all. The film steadily unravels as it goes on, retreading ground from the first act and turning to increasingly outlandish plot twists just to keep things moving. For die hard fans of Todd Solondz (which I must admit I am not), this is likely to be a Marmitey sort of film – it will be loved on principle or hated for being such a departure from the director’s previous MO. Dark Horse is still recognisably the work of the man who made Welcome to the Dollhouse, after all, but it’s imbued with almost none of the incisive satire that has made Solondz such a consistent critical hit. For everyone else, it’ll average out as OK-ish. And ‘OK-ish’, one suspects, is the last thing Todd Solondz ever wanted to be.