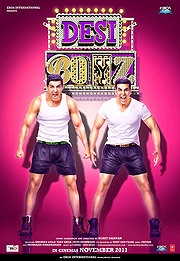 Director David Dhawan’s son Rohit takes to the foldy chair for the first time for Desi Boyz, an irresistibly over-the-top rom-com which scoops up and discards genres, plotlines and even languages with reckless grace and a total disregard for the vesical capacity of the audience. You’ll laugh, you’ll goggle, you’ll question the homoeroticism and you may well be left wondering whether Adam Sandler would be more appealing if he delivered every other line in Hindi. (Spoiler: he probably wouldn’t.)

The year is 2008, and despite the recession Indian-born Londoner Nick (Abraham) is on the up and up – he’s a successful investment banker, he’s got a gorgeous flat and he’s just spent most of a forty thousand pound bonus on an engagement ring for his girlfriend Radhika (Padukone). As far as she’s concerned, the only fly in the ointment is Nick’s oldest friend Jerry (Kumar), a lifelong slacker who has sponged off Nick ever since he dropped out of college and began taking a series of menial positions. He’s just been fired from his umpteenth crappy job, but as long as Jerry keeps topping up his bank account everything will be fine. Right?

Wrong. The recession finally bites and Nick loses his job the day after blowing his bonus; the oblivious Radhika goes on planning her fantasy wedding, but Nick’s burning through his savings and can’t find another bank to take him on. And just to complicate matters, Jerry is reminded that his orphaned nephew Veer (Virej Desai) has school fees that need paying – if he can’t stump up the cash, Veer goes to a foster home. The boys are despairing in a bar when they’re approached by a mysterious businessman who runs ‘Desi Boyz’, an escort agency which spreads happiness (and gleaming torsos) around the lonely womenfolk of London. Jerry (or ‘Rocco’, as he is soon to be known) is up for it, but Nick’s not so sure. However, with his options running out Nick – or, rather, ‘Hunter’ – joins in and the boys become the most successful escorts in London. Just so long as Radhika doesn’t find out… I haven’t touched on even a third of the plot of Desi Boyz above; every time the film shows a sign of slowing down, director Rohit Dhawan simply introduces a new plotline. Engagement getting old? Cue explosive breakup! Post-breakup malaise dragging its feet? Let’s move Nick into a caravan in front of Radhika’s house! Lack of direction for Jerry? Send him back to university! The plot is borrowed from dozens of films – The Full Monty and Deuce Bigalow are obvious sources, closely followed by Big Daddy, Billy Madison and, inexplicably, a Pepsi Max advert which is copied shot for shot. It’s no wonder the tone is somewhat uneven.

Once you get past the ‘guess the film this scene is stolen from’ stage, though, Desi Boyz is great fun. Fresh from several years of universally panned films, Akshay Kumar is right back on track with a deliciously funny and frequently tender performance which combines a very English dose of self-deprecation with the tropes of the archetypal Bollywood hero. John Abraham is sparky and inoffensive as the (admittedly underwritten) Nick, and his scenes with Radhika’s eccentric father Suresh (Anupam Kher) are very watchable. Deepika Padukone and Chitrangda Singh, who plays Jerry’s post-intermission (oh yes) love interest Tanya, are both competent but barely there – this film is all about the boys. For my money, this is one of the best of the recent spate of Western/Bollywood crossover films. The unprompted musical numbers and colossal dance routines will still shock the uninitiated (although they seem pretty few and far between by the standards of the genre), but a racy script and light-handed approach to the traditional elements of Indian cinema make Desi Boyz accessible, fast-paced and funny in the best traditions of the screwball comedy.