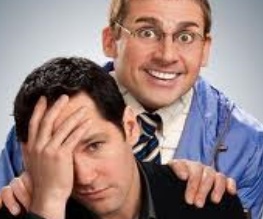 So you know what’s funny? Stupid people. But you know what you shouldn’t laugh at? Stupid people. Thus are the central concepts of Dinner For Schmucks set up, and with one constantly cannibalizing the other, the film veers madly from slopping around brainless slapstick to shoving our collective chins in vapid sentimentality. Paul, Steve – you should be ashamed.

Paul Rudd embarrasses himself as Tim – an ambitious young business executive who thinks his ship has come in when Big Boss invites him to a dinner party. The catch? All the guests are to bring along someone stupid; someone so inane, ridiculous and generally awful that they are in fact massively entertaining. The man who brings the biggest idiot will win Boss’s respect, and thus will land Tim that Big Promotion. It looks like Tim will refuse the invite out of principle until he hits Steve Carell with his car, and, unfortunately for all of us, doesn’t kill him. Upon seeing Steve’s (he shouldn’t be allowed to hide his shame behind a character) stupid stuffed mice collection and looking at his stupid face, Tim can’t help but stupid invite him to stupid dinner. Stupid.

When Steve turns up at Tim’s apartment a night early, madness demands to ensue despite all possible logic. Within about 20 minutes, Steve has destroyed Tim’s relationship, his home, his career, his prospects and his mind. But don’t worry, you’ll be glad to know that by the end, we all learn a valuable lesson about how great Steve actually is.

Picture the scene. A warm, floury woman in a lovely apron beckons you over to eat a delicious, freshly baked cake. “Try it”, she smiles, “it’s all for you.” However, upon taking that first bite, you realise that what you thought was a soft and appetizing treat is, in fact, a carton of greyish sludge. And actually, the woman is now hitting you with quite a large spade, screaming “YOU FAT PIG, YOU FAT PIG” over and over again. Dinner For Schmucks, with its hypocritical sentimentality, its wearying and patronizing “comedy” sequences and smug refusal to admit its own gaping flaws, is a bit like that. Spending half the time making mawkish, stupid jokes and the other half telling us how horrible it is to laugh at mawkish, stupid jokes, it’s like watching a schizophrenic P.S.E teacher fall down for two hours. But significantly less fun than that. The jokes wilt, the story is ridiculous and by the film’s comedic and emotional climax – a line about not being able to find the clitoris – all you really want is for Paul Rudd, Steve Carell, David Walliams and Jermaine Clement never to speak again. Which is a rubbish thing to want.

So who is responsible for this monstrosity? Director Jay Roach has helmed some fine comedies in his time; all three Austin Powers flicks and Meet The Parents, but was admittedly also behind 50 First Dates and Meet The Fockers. Should the blame land on his shoulders? As connoisseurs of stellar comedy Rudd and Carell should have known better, and maddeningly there’s no doubt that such a respected double-act will draw in the crowds. It’s deeply unfair that such terrible material has such an attractive gambit, and the saddest thing is that, despite everything, Dinner For Schmucks will do well. It will, there’s no escaping it. So please, please, heed this warning; do not be fooled by the line-up. This is a dreadful, dreadful film, and trust me, upon leaving the cinema ten pounds poorer, you can’t help but feel that, schmucks aside, the joke is on you.