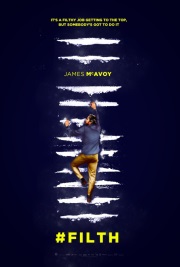 Scotland’s most shocking son has finally made it to the big screen. Bruce Robertson, the thieving, snorting, cheating, abusing plain-clothes maniac whose increasingly evil “games” make up Irvine Welsh’s best novel, would surely be a gift to any director looking to make his name – and Jon S. Baird has certainly made sure that his name and that of Filth will forever be entwined. As in “There goes Jon S. Baird, the bastard who ruined Filth. Throw something at him.” Detective Sergeant Bruce Robertson (a scruffy, intimidating James McAvoy leering from behind a ginger beard) is a man on the up; his beautiful wife is the envy of the force, there’s a promotion with his name on it just round the corner and he can get as much ching as he fancies from the Vice Squad. Although, having said that, nobody’s seen Carol recently. A vicious, conniving bully who appears to have once been an upstanding officer, Bruce lies and bluffs his way through life by setting his workmates against each other, tormenting his hapless friend Clifford Blades (Eddie Marsan) and never missing a chance to get his end away, ideally with someone else’s wife.

When a Japanese student is offed in an Edinburgh subway, Bruce heads up the murder investigation – but his reliance on coke and booze, not to mention those odd hallucinations that have started popping up, are doing a number on his work ethic. As he becomes increasingly paranoid and sadistic, Bruce’s various campaigns of harassment – against his protégé Ray (Jamie Bell), token policewoman Amanda Drummond (Imogen Poots) and the trusting Blades’ unfulfilled wife Bunty – intensify. Will Bruce manage to pull out of his tailspin before it all ends in disaster? Will one of the universally underwritten supporting characters find anything useful to do? Will we ever find out why Jim Broadbent’s character is a sort of Scouse Aussie? It just doesn’t matter, because nothing matters, because this film is a travesty. James McAvoy has given a number of passionate interviews about this film, the difficulties of getting inside such a twisted character, and how pleased he is with the result. On balance, I think he should be. McAvoy’s performance is constantly unnerving, often funny and occasionally moving, but he’s playing some sort of cinematic straw man – an evil bastard played for laughs, who we are encouraged to see as unforgivably nasty. There’s not much to say about the rest of the cast, because to a man they lack motivation, character development and humanity – Eddie Marsan’s Bladesy is funny enough in his pebble glasses and checked sweater, but the genuinely moving scene that should have been his last is ruined by a revolting make-up moment that a credible director would never have shot.

Bruce’s DI, a ponderous relic who dreams of writing a screenplay, is given similar brief, pointless life by John Sessions – it’s not that their performances, or any of the others, are actively bad, just that they’re playing characters you couldn’t possibly give a toss about. Even Bruce, whose rich, compelling back story is told in the book by a tapeworm that periodically invades the text, is stripped back to the bare bones – we’ve got no real idea why he behaves like he does, so there’s no reason to care. I’m not actually sure who’s got the worse deal, those who’ve read Filth before seeing it or those who haven’t; fans of the book will wince at every abraded subplot and eviscerated motive, while newcomers to Bruce’s world will, presumably, be baffled. There simply isn’t enough story left to make this film make sense. If you haven’t read Filth, a) you’re an idiot and b) I’ll try to keep the spoilers to a minimum in this bit. You’re in good company, anyway; if Jon S. Baird (who also, God help us, wrote the script for this ninety-eight minute career suicide note) has actually read it, cover to cover, I’ll eat Bruce’s vomit-steeped beard trimmings. Filth is the precise opposite of a redemptive story – although we eventually discover why Bruce is so ill, he finds no salvation and the book ends on a crushingly sad and genuinely unforgettable note. In the film, this perfectly sculpted moment is first trimmed of its single most important aspect and then played for laughs, before jolting into a revolting animated credits sequence depicting Bruce as a happy cartoon pig with a copper’s hat. In five seconds, it manages to encapsulate everything that’s wrong with this film – in trying to ape the surrealist style of Trainspotting, tone down the unrelenting horror of the novel and turn a psychopath into a comic antihero, Baird has ruthlessly gutted Filth and presented us with its ripped, steaming skin, blithely ignoring the fact that everything significant or substantial has been discarded along the way. I hope he never works again.

Previous: The Selfish Giant
Next: RoboCop