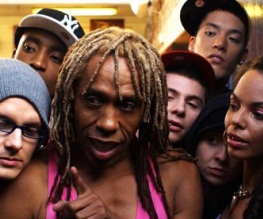 I approached FIT with an open mind. Described as “A kind of gritty take on the shiny E4 drama Glee” and being a bit of a ‘Gleek’ myself, I couldn’t help but have a guilty sense of anticipation that this might be rather good. This lottery funded film, made by Stonewall – the lesbian, gay and bisexual charity does have more than a touch of the ‘community production’ feel about it. Not surprising when you read that it’s been made in association with The Department for Children and is endorsed by Mayor of London, (you also can’t help but feel that with the abundance of branded tracksuits, Adidas knew they were onto a product placement gem!) The film revolves around six miscreant students in a sixth form dance and drama group. Karmel struggles with lesbian feelings despite a stereotypically ‘straight’ appearance and is fearful of disappointing two flippantly homophobic parents. In direct contrast, her best friend Lee has a sort of reverse coming out of her own during the film. This ‘don’t judge a book by its cover’ storyline serves as the first of many moral lessons that we can only assume the ultra-thin plot is designed to facilitate. Tegs, who is not openly gay (though it is implied and therefore assumed) is a victim to bullying at the hands of homophobic bullies Isaac and Ryan. The sporty, popular, sometimes aggressive Jordan, is not only good friends with Tegs, but also with Isaac and Ryan, and seems the least likely candidate to have an epiphany about his sexuality, although he inevitably does. Ryan struggles with his identity and lashes out violently before coming to terms with feelings regarding his own sexuality. Isaac, on the other hand, is simply an unrelenting bully with an unhappy homelife.

FIT was written and directed by Rikki Beadle-Blair, who also stars as the students’ dance and drama teacher. Blair’s character, the ‘out and proud’ Loris, sports tight pink lycra and teaches not only drama, but openness, tolerance and mutual respect. All comparisons to Glee start and end with a single song/dance routine that seems to develop and build throughout the movie into a final ‘street dance’ with lyrics that personally I found a little suggestive considering the educational stance of the movie. A huge aim of this film seems to be to discourage the use of the word ‘gay’ in a derogatory manner, though I did find that in the effort to hammer this point home some of the best acting and most poignant scenes were ruined. The film does contain constructive discussion, and some quite gritty moments with Tegs suffering violence at the hands of the bullies. These moments illustrate accurately just how scary it must be to suffer this kind of prejudice, but without a strong story to back it up these parts simply aren’t enough to make this film shine.

So what did I like about this film? Short stunted shots effectively conveyed the passing of time and hazy dream-like camera work gave quite an ethereal feel to the urban backdrop on occasion. At times these visual techniques combined with music, very effectively created a tense atmosphere which reminded me stylistically of E4 triumph Skins. A few too many exaggerated ‘street’ accents aside, I believe the message of acceptance the film sends out is very worthwhile and this film would probably change a quite a few minds in the classroom. That being said, I found the number of people in the film making the jump from heterosexuality to homosexuality so incredibly disproportionate to statistics that it’s just not believable. My biggest problem with it however was how the ‘straight’ characters were portrayed. Aside from a few parental characters, every heterosexual person in the film either had some kind of issue with homosexuality or displayed ignorance regarding it. As a liberally minded person I found it quite insulting.

If when I had been at school my teacher had told me we were going to spend 2 hours watching a movie, I’d have probably have thought ‘great!’ and I’d have probably quite enjoyed it too. Taken for what it is, FIT is a pretty sophisticated pastoral educational tool. But does it have an engaging storyline? Well-developed characters? An even halfway okay script? No. If I could give FIT one piece of advice, it would probably be this: Stay in school. Educational you may be, Saturday night at the movies you most certainly are not.

Previous: Colin Farrell to play lead in Total Recall?
Next: The Wolverine – Definitely not a sequel