Hit and Run stars Dax Shepard (a busy boy, given that he also wrote, co-edited and co-directed the film) and Kristen Bell as happy couple Charlie and Annie, who are content living in a small, charming town in middle-America. Charlie has been under witness protection for the past four years, looked after by Tom Arnold‘s hapless US Marshall Randy, whose ineptitude landed him with the dead-end detail. He and Annie live a peaceful life; when Annie gets nervous about a big meeting at work, Charlie calms her down, and gives a very touching, very comforting speech about how perfect she is, and about how everything is going to go smoothly.

Can you guess what happens next?

Offered her dream job in LA, Charlie very selflessly decides to break his witness protection and help get her there in time for the interview, ferrying her across the country. The pair are pursued variously by Randy the inept Marshall, Michael Rosenbaum’s deluded ex-boyfriend, and the criminals whom Charlie was in witness protection to hide from in the first place.

Hit and Run may not be the most original comedy – and even for a comedy, most of what happens here doesn’t make a blind bit of sense – but the fun tone and warm performances from the leads make up for a lot of that. Bell, as usual, oozes likability, and (surprisingly) so does Dax Shepard. Seeing his name attached to so many jobs in the credits as well as starring might make some wary, but Shepard is effective as the languid, endearing, reformed crook Charlie, whose witness protection name is Charles Bronson – something that sounds awful, but that the film actually uses to inform the character, as well as to have a bit of fun with. The chemistry between the lead pair is palpable – as it should be, given that they’re engaged in real life. The supporting cast, meanwhile are a lively bunch. Michael Rosenbaum’s Gil, the ripped lunk who’s actually a bit of a sap, is a marvelously deluded creation, while Bradley Cooper’s Alex Demitri – all dreadlocks, shades and trophy girlfriends – is an engaging nemesis. Best not to test him when it comes to dog food…

Elsewhere, Tom Arnold’s hapless Marshall is played broad – which is fine – but also feels under-cooked. And that’s a common theme throughout the film; it feels like it’s a few punchlines short of a pack. A running gag about the use of Pouncer – a Grindr-like app for locating other homosexuals in the vicinity – is amusing, but never really amounts to much. The pins are all set up, but they’re not knocked down with anywhere near enough conviction. 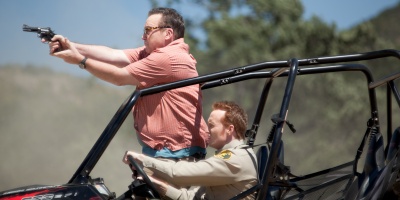 There are genuinely laugh-out-loud moments, though. The reveal of why Cooper’s Demitri feels so wronged by Charlie is hilarious, even if you suspect the stereotyping and casual racism therein mean it shouldn’t be. However, the film has Bell’s character – a major in Non-Conflict Resolution – who constantly keeps the rest of the cast in check by calling them on their bullshit. It allows the film to have its cake and eat it too; to say these offensive (albeit funny) things, whilst also simultaneously condemning them.

Sadly, the action never quite convinces. Shepard directs the rest of the film with an easy warmth, but the set-pieces here – all of which are car-chases – feel inert; mere excuses for the stunt-drivers to show off their mettle (and their metal – this is a good film for petrol-heads).

All of this missed potential that could have raised the film above is confounded in the final moments, where a minute-long cameo from Jason Bateman provides the funniest line of the film, and is followed moments later by an even shorter cameo by Sean Hayes (famous for Will & Grace, but being neither Will nor Grace). Where were they for the rest of the film? No disrespect to the rest of the cast, but these fun and higher-profile cameos should have been peppered throughout the film, rather than merely tacked on to the end. 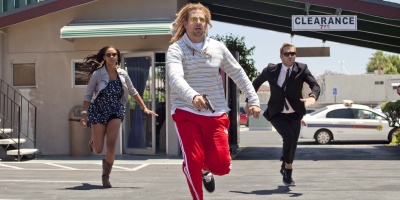 Having said that, Hit and Run remains a likable, knockabout rom-com; one that doesn’t push the ‘rom’, rather letting it flow naturally. The relationship between Charlie and Annie is sweet, their conversations amusing, and their reactions to finding out more about the other are believable. With the groundwork of a funny script all laid out before them, we just wish they’d dug a little deeper for a few more gems.

Previous: Cheat Sheet: Emily Blunt
Next: We Need To Talk About Lynne