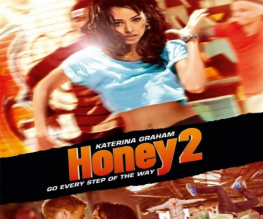 Dance films can be enjoyable for those not particularly inclined towards dancing, or even the more–often-than-not insipid drama story surrounding all the cool jumping around. You can see why they’re so successful. Dancers and wannabe dancers will always be interested in these films and it can be quite cool to watch a group of people pulling off some (ahem) ‘fresh’ moves and impressive, ya know, back flips and stuff. What we have with Honey 2 is exactly that. The trailer to the original Honey included the catchy tag line, “Reaching out, taking a chance, and doing it on your own terms,” and although this film’s story takes on a relatively different line to its prequel, that pretty much sums up what we’re talking about here too.

We’ve left Jessica Alba’s Honey Daniels behind and now have a new feisty heroine in Maria Ramirez (Graham). Having just left juvie she must go live with Honey’s mum and work at her dance studio. She must wrestle with the temptation of joining her old boyfriend and troublesome old crew, the locally famous 718, and keeping her head down and leading a good life, with a job and everything. On the side though she only bloody goes and joins a small crew of ragamuffin wannabes at the Honey Daniels Centre, leading them into battle against the evil 718 whilst fulfilling her poignant rags to riches, street rat to noble hip-hop priestess, I-just-need-someone-to-believe-in-me story. Oh and there’s a boy involved too.

As a story it’s fair to say it’s momentously clichéd. The love interest is a blonde white guy that repeatedly gets teased for being rich and going to college. There’s also a angry young girl whose trust must be earned in amongst Maria’s HD Crew and members give up and quit, only to come crawling back in the next scene. It’s also a competition film, which brings with it its own problems of predictability. The two crews are going head to head on a television show hosted by Slater from Saved By The Bell. Do you make them win? Is that too obvious? Should they draw? Lose with dignity? Just like it must have been quite taxing to come up with a different ending to every Rocky film, so too will it always be a difficult task to make the ending of Honey 2 interesting. But, I guess, it’s mostly the dancing that’s important. As a dance flick, it gives you everything you want: plenty – and I mean plenty – of dancing. Five minutes rarely goes by without someone popping (and locking) out some attitude ridden street moves and the competition itself has an enormous amount of stages (too many some might say). The fact that all of the dancing is surrounded by such a stereotypical format is to be expected, but it is nonetheless fairly painful for the non-dance-film initiated. These films work under the pretence of being moving, motivational, achievement stories; films about achieving a goal against the odds and getting out of the cage of inner city life, when really they are just films with loads of dancing. The emotional depth the film half-arsedly attempts in Maria’s appreciation of the people that are helping her, and the love story between her and college boy Brandon, just goes to show that all the focus is on the dancing. In that case, why not just make a pure dance film, forgetting all the cheese and emotional moments we’ve seen so many times before? It would no doubt be just as successful.

Honey 2 takes over from where Honey left off, only without the likes of Alba and Mekhi Phifer it’s already lost a great deal of appeal. Nonetheless it will succeed in achieving its pretty basic goal – being a film you can shake your ass to. If you like dance there will no doubt be something for you in Honey 2, but if not, it’s got little else going for it.