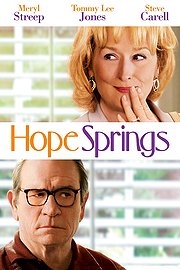 There are hundreds, maybe thousands of films that deal with the problems faced by thirty-somethings at various stages in their lives. Perhaps, as in He’s Just Not That Into You, they have yet to meet “The One,” or maybe they’re struggling with a surprise pregnancy like the main character in Knocked Up. One question that is seldom posed in any of these films, is the question of what happens when the children have left the nest, retirement is around the corner and the wedding photo is no longer taking pride of place on the living room wall but is residing in the bedside table bottom draw gathering dust. What happens when the routine yourself and your spouse have become so accustomed to ceases to be a comfort and slowly becomes suffocating? Hope Springs seeks to find the answers to these questions with surprising results.

Put upon housewife Kay (Streep) is desperately unhappy. She is, to all intents and purposes, married to a man-shaped bust of wood -played wonderfully by Tommy Lee Jones- who occasionally opens his mouth to ask for dinner. Despairing and in mourning for her marriage, Kay books a week at the Hope Springs resort, hoping that marriage counsellor Dr Feld (Carell)can help them to reignite the passion in their relationship. What follows is a thought-provoking and original story that will leave you holding your sides with laughter and reaching for the tissues in equal measure.

At one point we seriously considered writing the rest of this review using only the words or variations on the words: “Meryl Streep is awesome and queen of everything.” She is simply brilliant here. Her performance is so nuanced, so subtle, that it is impossible to believe that this timid, subservient creature could really be the steely hard faced boss from hell in The Devil Wears Prada. Streep’s ability to convey emotion with the tiniest quiver of the lip or movement of the head is second to none; the close up is truly her best friend and it is heart achingly sad to watch her yearn to be touched and loved by her unresponsive husband. 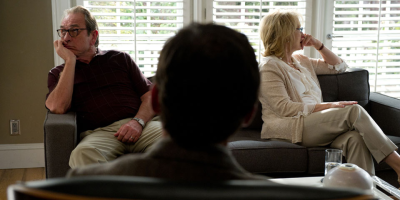 Tommy Lee Jones as Arnold is also superb: he is the perfect mixture of curmudgeonly and vulnerable which mixed with Kay’s earnestness makes for some really endearing sequences in which the couple of thirty-one years realize that they still have much to learn about each other. Steve Carell is a tad one-note with his depiction as the sympathetic counsellor, but perfectly navigates the delicate ins and outs of a union that has seen its better days.

The decision to depict Kay as the character who craves physical intimacy is a brave one. Hollywood has a long and enduring fear of presenting female sexuality in anything other than a twisted or depraved light (Sharon Stone in Basic Instinct anyone?) and it is really refreshing to see an older female express a need for sexual closeness in a positive context. Viewers may also be shocked at the decision to include some pretty raunchy scenes between Streep and Jones which don’t feature distracting music or cut away before things get too raw. There are some scenes, such as Kay’s attempt to practise oral sex by fellating a banana, which do feature sexual slapstick elements but what we loved about this is that witnessing this level of intimacy between the two isn’t “icky,”or uncomfortable. Rather, it is a touching portrayal, and one that refuses to take the easy route by turning the main characters into comedy relief. 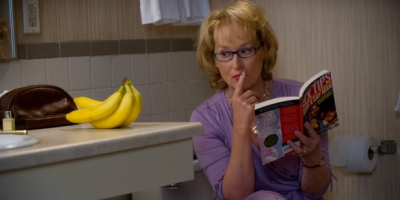 Of course, there will be some who are put off by the film’s honest approach, but the key to enjoying this film is in understanding that the sexual element is included as a way of detailing the breakdown in communication which has lead to the couple’s gradual estrangement. As the film progresses, we see that it is not simply the lack of sex, but the lack of spousal closeness which pains Kay so, and watching her face light up with every small morsel of affection that Arnold slowly begins to offer will soften the hardest of hearts. This is an issue that will soon affect us all and we salute the filmmakers for having the guts to tackle it head on.