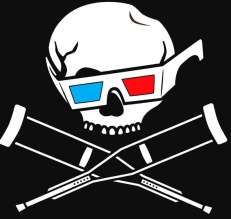 Jackass 3D is the latest release by the affectionately named Dickhouse Productions – a label that really just sums up the intentions of the movie. Comprising the usual Scooby-Gang of social misfits, the film makes no attempts to hide its straightforward nature. Set up stunt. Perform stunt. Laugh at pain/puking experienced by your mates. And then repeat.

And while a part of me wanted to chander as well, seeing some of the more disgusting ideas unfold (look out for the train scene), the sadistic Mr. Burns in me couldn’t help but laugh at the hilarity of these “grown men” experiencing such excruciating pain and disgust. And apparently twisted humour is all the rage right now because as of this moment over 100 million dollars worth of people enjoyed it as well. Unsurprising really because Johnny Knoxville and his pals do a great job in keeping it interesting as each stunt is exponentially more idiotic and painfully funnier than the last. These stunts, let’s call them accidents from now on as stunt would imply a potential for success, are also paced out and introduced so well; creating a great anticipation and adding superbly then to the actual event. The 3D element supports all of this very well. The film was shot in 3D, which makes a big difference technically speaking, but here to be honest it’s more about what is being filmed. Many of the stu…erm…accidents are filmed with 3D in mind. Knoxville and his merry men would therefore have come up with these specific gags thinking about how 3D could make them look more amusing. Setting it apart from their previous films because they really needed to get creative with what would look funny in 3D and what wouldn’t. They had the technology at hand, why not use it? Much like the baseball bat theory. So where other films in general might use 3D to increase immersion, Jackass 3D simply wants to be shown off in the most comical fashion. High-five to that! Ultimately this celebration of the ridiculous is what makes and has always made Jackass funny, it has never tried to be anything its not. Director Jeff Tremaine isn’t trying to win Oscars; he’s making a movie people can watch and laugh at, and given the actions and reactions of the film crew – something they can laugh at as well. I can’t review this film like any other because, well, it isn’t like any other film. There is no over-arching storyline, subtle messages or character development and there doesn’t need to be. That’s kinda the beauty of Jackass. Sure, who doesn’t like watching people inflict gross amounts of pain on themselves but in the end it’s a great film to plonk down and have a good laugh to. Some of what happens on-screen won’t be for everyone – but do yourself a favour and give it a look. They’re risking life and limb after all.