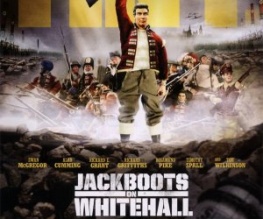 Jackboots on Whitehall, which premièred at the Edinburgh International Film Festival earlier in the summer and is due to hit your screens in October, is categorically like nothing you’ve ever seen before. Constructed entirely using animatronic puppets and stop motion, it explores a sinister alternate history scenario in which Germany successfully subjugates England and a resistance movement must gather help from an unexpected quarter in order to oppose the Nazi horde sweeping across this green and pleasant land. It features some of Britain’s most venerable and talented actors, overflows with subtle nods to other cult films (for believe us, this will slot comfortably into their ranks) and rocks some of the biggest explosions since Jerry Bruckheimer and Michael Bay last had cyber-sex. It’s amazing.

The year is 1940. Following the failed attempt to evacuate Dunkirk, the entire British army is trapped on a French beach with no way of returning home. The Channel is now England’s only defence against the advancing German regiments, but when the Führer (Alan Cumming) hits upon the idea of drilling a chunnel from Calais to Trafalgar Square resistance seems futile. Winston Churchill (Spall) is besieged in Downing Street with only his Punjabi bodyguards (led by Sanjeev Bhaskar as Major Rupee) to defend him, and chief bad guys Goering, Himmler and Goebbels (Richard Griffiths, Richard O’Brien and Tom Wilkinson) are running riot in Whitehall. It falls to Chris (McGregor), a Kentish farm boy who was prevented from joining up by his massive hands, to lead an expedition to London and save the Empire from ruin, totalitarianism and dreadful Teutonic cuisine. Exciting stuff, don’t you think? In all honesty, this would be a pretty barn-storming film even if it were live action – the story is surreal and ridiculous, but it’s very well-written and the pace never slackens. The fact that it’s been made with puppets just heightens the drama. Real tanks are a little prosaic and boring on film, but in Jackboots they burst from the ground with a Thunderbirds-style drillbit and blow the head off a Landseer lion! Never before has Kent been so picturesque, Scotland so bare or Goebbels so utterly batshit mental. It’s super fun.

Probably the best WWII puppet-based epic ever made

The fact that two totally unknown writer-directors were able to score such an all-star cast is testament to the titanic quality of Jackboots on Whitehall. The cast is clearly having enormous fun – when else would Richard E Grant have the opportunity to stand on Hadrian’s Wall in a dog-collar and call a load of Germans wankers? – and the difficulties of humanising mannequins are effortlessly overcome by the veteran talents voicing the main characters. Hardened film fans will also thrill to the pop cultural references hidden throughout – a sequence mimicking the beacon fires from LotR: The Two Towers is exquisite, and there’s a solid five minutes that lovingly rips off all the best lines from Zulu. There are even nods to The Terminator and Lethal Weapon (not telling; go and see it).

High culture it is not – a lot of the humour is unashamedly camp and/or slapsticky – but I promise that you’ll have more fun with Jackboots on Whitehall than you knew anyone but your grandfather could have whilst watching a Second World War film. This is a spectacular debut by two very talented filmmakers, and we think they just might be the next big fraternal success story in cinema. The Matrix and No Country for Old Men may have been pretty good, but did they feature a Sopwith Camel flying into the Hindenberg? Did they hell.