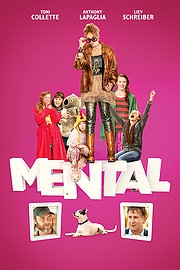 Mental follows the travails of the Moochmores as they cope with the sweet, naive and bipolar mother of the family Shirley (Rebecca Gibney). After a manic episode in which she buys everything ever, she is admitted to the local mental health institution and her 5 children are left to bicker about which of them has the most dire mental illness. Barry Moochmore (Anthony LaPaglia) is the mayor of the town and a distant bastard to his daughters. He decides to pick up a hitchhiker (Toni Collette) and installs her in the home as the girls’ carer. Apparently always on the verge of mania herself, new nanny Shaz seems suspiciously well versed on mental disorders and how to diagnose them. She attempts to stabilise their home-life and teach the girls about the illusion of normality in Australian society.

Mental is a distinctly odd movie, almost as if it were schizophrenic itself. It starts off promising, building a world around the Moochmore family that is replete with mental illness. The supporting cast are nearly all suffering from one debilitating disorder or another; OCD, sadism, psychopathy or other psychological impairments. By not drawing too much attention to the crazed residents of this Australian town, they seem believable yet bizarre. This utter zoo of oddballs are also typical archetypes found in all silly comedies. One could infer that Mental is somehow critiquing the pedestrianisation of these severe and debilitating conditions. You might even find yourself suspecting that Mental could be a subversive masterpiece.

This doesn’t last. Whatever goodwill the film builds in its few moments of brilliance is completely lost every time Mental degrades itself into insulting slapstick. In a film that occasionally regards its audience as something more than a gabble of idiots, the frequent descents into anarchy are so soul-crushing as to make the film almost unwatchable. These scenes eventually meld into a shouty, fighty and unfunny slurry. The story loses all focus and any commentary on the state of modern psychiatry disappears completely up its own backside. It almost feels like the producers of the film thought that they couldn’t sell a film that derived its humour from wit. 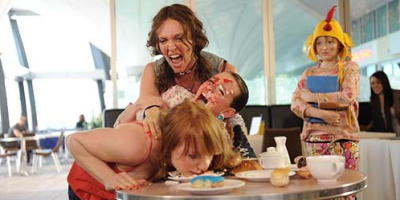 Coral (Lily Sullivan) is the eldest of the daughters and appears to be the protagonist of the film for a while. She does a decent job, and the scenes with her trying to diagnose herself as a schizophrenic are enjoyable. She feels oddly absent for large parts of the film. This is a mistake, as it is through Coral’s eyes we should see these experiences. Although Toni Collette is fantastic as Shaz the nanny, she becomes too much of a good thing. It would have been lovely to remain more with Coral and explore the neuroses of a teenage girl and her attempt to substitute her absent mother and father. She also has a love story on the side that is sweet, disturbing and inconsequential all at once, and it climaxes (an oddly precise term) far too early. 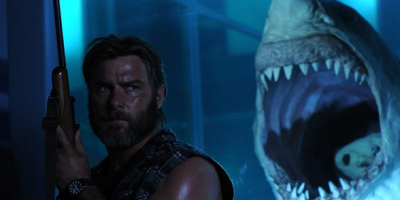 Liev Schrieber utterly steals every scene he is in. His scarred and grizzled shark-obsessed attraction-owner is engrossing to watch. In one particular Shakespearean soliloquy, he lovingly creates an analogy between madness and sharks. “Everything is sharks,” he growls in a perfect Aussie accent, “Life is sharks“. It’s a crime that he is given such little screen time. Mental sets Liev Schrieber’s character up as a surrogate father figure for Coral, but, alas, it goes nowhere. There are also fantastic moments from all the other heavy-hitters in Mental. Antony LaPaglia has at least one amazing scene in which his disappointment with his life and his restrained violence come bubbling to the surface. It’s just not enough to forgive all the other scenes that a toilet couldn’t swallow. 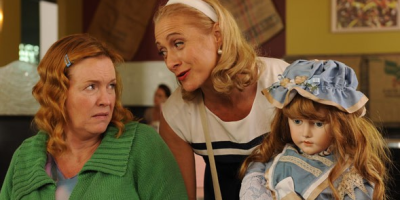 The biggest disappointment in Mental is that it begins by treating disorders accurately and subtly, yet proceeds to portray the mentally ill as zany cartoon characters. There is a also distinct whiff of amateurism in Mental, which is odd because writer/director P.J. Hogan has done this before. He brings none of the easy charm of My Best Friend’s Wedding or Confessions of a Shopaholic to Mental. It’s astonishing that a man who could have written such brilliant scenes in Mental, such as when Rebecca Gibney describes her manic depression, or Toni Collette’s imaginative use of the word ‘cunt’, could have also penned scenes that require the viewer to smash their head into the floor repeatedly as a matter of routine.

The very last scene is one of the laziest, stupidest moments in cinema history. There is no hyperbole there. Although one would have thought by that point you’d have given up caring about Mental, it still manages one last middle finger to your sensibilities. Suffice it to say the scene appears to have been inspired by Looney-Tunes. It will elicit from you a couple of imaginative uses of the word ‘cunt’ yourself.

Previous: Cheat Sheet: Liev Schreiber
Next: Emma Thompson gets her bad witch on for Beautiful Creatures