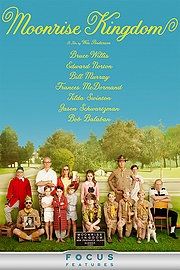 Wes Anderson’s seventh film opened this year’s Cannes Film Festival to rapturous applause, and this weekend it broke the US record for the highest per-screen gross ever. D’you know why? It’s because it’s completely brilliant. The King of Indiewood is on rare form with this nostalgic look at an America which never really existed, conjuring up a practically sepia-toned vision of the passions and panics of childhood. Donny Osmond may have sung about puppy love, but did he ever rescue his girlfriend from her family and run away to get married? Aged twelve? Did he bollocks. It’s September 3rd 1965, and on the island of New Penzance everything’s proceeding pretty much as usual. Jed’s flying in with the mail, Captain Sharp (Willis) of the Island Police is fishing and waiting for a crime to come along, Counsellor Bishop and his wife Counsellor Bishop (Murray & Frances McDormand) are bickering and debating points of law and chain-smoking Scout Master Ward (Norton) is preparing to inspect his intrepid troop of Khaki Scouts.

One of them is missing.

The rogue scout is Sam Shakusky (Gilman), an intelligent but emotionally unstable twelve-year-old who, unbeknownst to Ward, is orphaned and living with a foster family. Bullied by the other scouts and bereft of companionship, Sam has spent the last year corresponding by letter to Suzy Bishop (Hayward), a similarly awkward social outcast who lives across the island with her three brothers and fractious lawyer parents. They’ve been planning a joint escape from their respective confinements ever since they met (she was dressed as a raven; it’s a long story), and on this sunny late-summer day their plan is finally put into action. But where can two twelve-year-olds with only an air rifle, some beef jerky, a kitten in a basket and a portable record player possibly hope to go? The police, the scouts and Social Services (Tilda Swinton) are on their tail, and it’s only two days until the biggest storm in Penzance Island history… There are few commercially successful directors who can be said to have an instantly recognisable aesthetic, and fewer still that we’re actually interested in any more – take a bow, Tim Burton, you and your pinstriped pseudogothic claptrap. Anderson belongs firmly in the former camp, and right from the opening sequence of Moonrise Kingdom (an exquisitely constructed series of extended panning shots around the Bishops’ house, set to Benjamin Britten’s Young Person’s Guide to the Orchestra) it’s evident that this will fit the mould. In fact, it does more. In the rarefied air of Penzance Island, Anderson’s trademark blend of whimsical and incredibly detailed shots, razor-sharp dialogue delivered completely deadpan, symmetrical framing and (let’s not try to ignore it) taxidermy combine to produce the perfect film to present to an Anderson virgin. I saw some pretentious git elsewhere online describe Moonrise Kingdom as ‘the Platonic ideal of a Wes Anderson film’, and although I hate him for the choice of words I can’t argue with the sentiment.

It’s not just the stuffed animals that are being reused, either. Plenty of Anderson’s old guard are present, from Bill Murray (“I’m going out back to find a tree to chop down”) to an almost unrecognisable Jason Schwartzman as the fabulous Scout fixer Cousin Ben. There are some unexpected big names thrown in too, and they all deliver – Tilda Swinton’s futuristic, electric blue-clad Social Services (that’s her name, apparently) is terrifying in exactly the way we demand that all Tilda Swinton characters are, Edward Norton’s earnest scoutmaster – all freshly-ironed neckerchief and long socks – is a masterclass in deadpan humour, whilst Bruce Willis (cast against type and re-equipped with hair) is genuinely endearing as the mournful, softly-spoken Captain Sharp. All these actors and more are given beautifully nuanced little characters and then, for better or worse, utterly ignored in favour of the main attraction; ignoring for a moment all the touches guaranteed to please long-term fans of the director, the real stars are newcomers Jared Gilman and Kara Hayward. Despite their age, despite this being their first film, the chemistry between these two young actors is easily the equal to that found between, say, the vastly more experienced Kodi Smit-McPhee and Chloe Gracë Moretz in Let Me In. Like all the funniest kids, they’re slightly too mature and significantly too intelligent for their own good – Sam smokes a corn cob pipe and paints watercolours of Suzy in her underwear, Suzy wears outlandish eyeshadow and listens to Françoise Hardy. They’d be furious if they knew how deliciously funny their intense love affair appears to the outside world…

There are a few, blink-and-you’ll-miss-them problems, mostly to do with the erratic pacing in the second half of the film, and there will inevitably be critics who find it juvenile or even trite. They’re wrong. I’ve typed this entire review with a smile on my face, because it’s wonderful – really, truly wonderful – to see a film which is as beautiful as it is meaningful, and one which boasts equally staggering talents on both sides of the lens. There are much more interesting things to say about Moonrise Kingdom than that, of course there are (its worth as a dialogue on dysfunctional families and cross-class relationships, on society’s ethical edicts versus intuitive moral law, on the sheer magnitude of what it means to ‘grow up’, is enormous) but now is not the time. Go to the cinema – not tomorrow, not next week, now – and just bloody wallow in Moonrise Kingdom. Then we’ll talk.