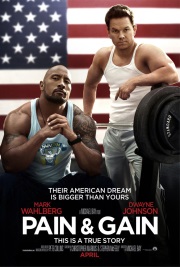 We (royal) are, for some reason, SO willing to see Michael Bay redeemed. I was so convinced of Transformers’ potential greatness that I didn’t realise it sucked until about an hour after I’d seen its SEQUEL. And then I saw the big snake robot eat a building and thought “F*CK, Transformers 3 might actually be fine/good!”

Same deal with his latest film, and the biggest departure from his signature style(?) to date, Pain & Gain. The trailer looked great; True story! Bright colours! Weird camera tricks! Marky Mark and The Rock! Debauchery! No explosions! But let’s all agree on this, right now: this is the point of no return. From now on, assume that all Bay releases will be unwatchable. And let’s try to pretend that The Rock (the other one) as someone else’s doing.

Marky Mark (let’s just do this for everyone) believes in fitness. It’s really hard to work out whether Bay and screenwriters Christopher Markus and Stephen McFeely (who’ll be collectively referred to as “Michael Bay” from now on) sympathise with him or not, but let’s assume for now that, like rational people, they don’t. Marky Mark is sick of being Super Stacked but somehow not blessed with success, which he sees only in terms of 1. $$$ and 2. Grrlz. Then Ken Jeong gives a presentation, explaining that being a “doer” has made him rich in both $$$ and Grrlz. Marky Mark interprets “doing” as torturing and extorting Jewish crim Tony Shalhoub, the only other principal cast member with hair, and so teams up with straight-edge God-bothering man-mountain The Rock and Anthony Mackie, a Black Guy who likes Big Girls and has anablolic’d himself to impotence. Cue a load of old bollocks in glorious Technicolor.

Pain & Gain is adolescent to the Nth degree, but not just in terms of themes and content; no, it goes deeper. It feels like it was written and directed by teenagers. Structurally it’s a mess, flurries of activity and montages bridging the gap between a handful or tortuously extended sequences of people doing unpleasant things ineptly; first draft sh*t, in other words. There are characters, like Ed Harris’ detective and Rob Corddry’s gym manager, whose roles are so incidental that they disappear for huge stretches of the narrative, presumably because someone forgot to keep writing them in.

The dialogue admittedly boasts a handful of puffed-up zingers, but otherwise consists entirely of lengthy, jawdropping-if-sincere sermons on fitness/success/’merica and a ton of unbelievably lame, half-written guff (“Jesus Christ himself has blessed me with many gifts! One of them is knocking someone the fuck out!”) at a rough ratio of 2:1. Oh, and those weird camera tricks? There’s just slo-mo, Sir Digby Chicken Caesar and normal. Child’s play.

And then can we talk about Marky Mark screaming “f*cking Chinese cr*p!” at a chainsaw? Can we talk about the comedy “illegal immigrant arriving in a car boot” sequence? Can we talk about how when I described Anthony Mackie as “Black Guy who likes Big Girls and has anabolic’d himself to impotence,” that was because I had absolutely NOTHING else to go on?

Alright, I’ll admit that on a purely cosmetic level this film isn’t what we normally expect from Bay. And there’s some cool stuff; there’s some decent use of colour, the pace and manic energy of the first hour manages to keep interest up and The Rock’s great as a sweaty, coke n’roids-addled imbecile. It’s not hard to imagine an immediate future in which Pain & Gain is given an easy ride by critics, but their kindness will be misplaced. Because we owe this mullet dinosaur NOTHING. By trying to make something completely new, Michael Bay has proved beyond doubt that the fundamental issue continuing to plague all of his films is.. Michael Bay. His worlds will only ever be Boschian nightmares patrolled by screeching disembodied tits, monolithic phallic structures built from car wrecks, and bloated masculine ids lying naked by neon swimming pools, farting PUA routines and quotes from The Art of War into their own open mouths. We can only hope that when he falls asleep at night, if indeed he’s still able to do so, it’s to the sound of his own screams.