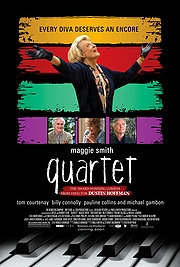 An English stately home; Maggie Smith being bitchy and intimidating; Michael Gambon in a funny little brocade hat – feel like you’ve been here before? Quartet might be all cosy British familiarity on the surface, but surely the decidedly unfamiliar addition of an all-American movie icon in the director’s chair should be enough to breathe new life into what has the makings of… well, let’s be honest, a bit of an old dog. But of course there is always the danger that such a creative mismatch could simply confuse an old dog, causing it to stare blankly into the distance for a moment before going back to sleep with its head in its paws. And for those of you who are wondering – the answer is B.

Beecham House is a swanky retirement home for classical musicians and singers run by sparkly-eyed Sheridan Smith – no longer that one with the topknot off Two Pints of Lager and a Packet of Crisps, but a proper old person doctor with just one blouse. Perhaps in an effort to compensate for their advanced years, the residents spend their time thinking up ways to draw as much attention to themselves as possible – shouting at each other, singing loudly in communal areas, sexually harassing staff (it’s funny because they’re old), and taking part in various activities designed to humiliate the elderly, such as zumba. A strict hierarchy is still in operation – a hangover from the old days – with principles getting a window seat in the dining room, while chorus sit by the door. So the elegantly flock-papered walls are understandably trembling with excitement at the arrival of a former prima donna (Smith) – a woman with a fearsome reputation and enough history to potentially capsize an already precariously rocky boat.

But hold on to your walking frames, because things are about to get rockier still. In a plot device older than the combined age of the residents of Beecham House itself, it turns out the financial future of the place is under threat; the upcoming annual gala performance in honour of Giuseppe Verdi its only chance of survival. Worse, the success of this years show depends on the temperamental new arrival reuniting with her three old friends (and one ex-husband) to recreate their legendary rendition of the Quartet from Rigoletto – something she is absolutely determined not to do. 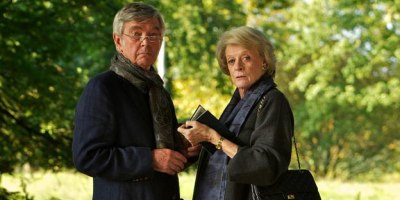 Since it’s winning no prizes for cinematic innovation, the chief draw here has to be the impressive cast, which reads like the guest list from this year’s BAFTA ceremony. But in all honesty, the best cast in the world would struggle to make sense of what proves to be something of a bewildering hour and a half. An unconvincing suggestion that hip-hop is the new opera (something to do with stabbings) is touched on and then quickly abandoned. In a story with opera at its heart, as much screen time is given over to Flanagan and Allen as to Verdi (a glance at Hoffman’s recent Desert Island Discs playlist might explain the anomaly). The subject of ageing is often discussed, but never really goes anywhere, with “isn’t ageing terrible” being about as insightful as it gets. Such is the lack of direction that at one point I began to wonder if Hoffman wasn’t in fact making some clever statement on the trials of old age by creating a film that is itself meandering and confused, wandering sadly from room to room unable to remember where it keeps the scissors. Adapted by Ronald Harwood (The Dresser/The Pianist) from his own play, it seems likely some focus has been lost in its ‘opening out’. So too has much of Harwood’s wit lost its bite when filtered through Hoffman’s relentlessly rosy lens. 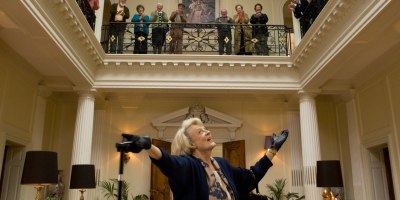 ‘Are you havin’ any fun? / You aint gonna live forever / Before you’re old and grey OK / Have a little fun!’ – It’s doubtful this jaunty little song has ever been heard in an opera house, but it’s the only one in the movie Hoffman really gives his full attention, and also the one he chooses to leave us with as the credits roll. If there is a message to be taken from Quartet, then, this appears to be it. All in all, it’s the equivalent of walking up to an old person in a retirement home and telling them to cheer up – a risky and, dare I say, patronising approach to take toward people of any age. Unless, of course, you actually then proceed to cheer them up by being terrifically entertaining or hilariously funny or just really interesting – things Quartet, unfortunately, fails to be. Are we having any fun? Not nearly enough I’m afraid.

Previous: The Hobbit: There and Back Again releases first image
Next: Alex Cross