Rebels Without A Clue 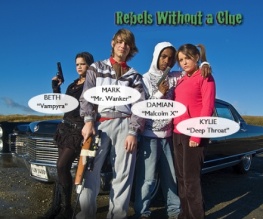 Deftly mixing coming-of-age and teenage romance themes with a surfeit of guns, coke and corpses, Rebels Without A Clue is a fresh and funny exploration of classic film fodder. Shot entirely on the 4k Red One camera against the arresting backdrop of Saddleworth Moors, it stood out as one of the most rough-and-ready films at this year’s Raindance Festival Official Selection – but like all the best British DIY, its wonky edges add to its charm without leading to a nightmare scenario wherein the front bits come off all the drawers and your pants fall on the floor. Or something.

Life moves pretty slowly for school-friends Mark (Barnett) and Damian (Gumbs), and there’s very little they can do about it – after all, bunking off loses its appeal when all you can do instead of learn is sit on a hillside with an air rifle and an illicit joint. (Actually, does it? That sounds brilliant.) When we first meet ‘Wanker’ Mark and ‘Malcolm X’ Damian they’re taking casual pot-shots at a couple dogging behind a car, but when a dodgy deal of some sort starts to unfold nearby they switch their focus to the suspicious looking men in cheap suits. Unfortunately, one of said suspicious looking men proceeds to shoot the other one into little bits, and then scarpers without taking care of either the corpse, his gorgeous vintage Cadillac, or the hefty quantities of cash and coke which they were in the process of trading.

Needless to say, Mark and Damian rock up and pinch all of the above, plus the various handguns left lying around the grassy knoll. The trouble is, the killer is soon back – and now he knows who he’s looking for. The boys need to rendezvous with Damian’s girlfriend Kylie (Brennan) and her Goth mate Beth (Dowling), ditch the stiff, flog the coke and escape from the moors before they all get attractively ventilated – and in an ideal world, they’d be able to wangle some sweet teenage lovin’ somewhere along the way. It’s only a matter of time before something goes spectacularly wrong…

This is Rochdale’s quota of excitement for the whole decade crammed into eighty minutes. The story never lets up, flitting from comedy to action and back again with style – there’s even a drizzle of pathos, with a particularly touching scene between Beth and Mark liable to stick in the memory. The lead cast is relatively inexperienced (although you may recognise Stefan Gumbs from 2009’s Looking For Eric), but the young actors hold their own well, particularly considering the challenges of shooting one’s first or second film on what is essentially a hill. In the Peak District. In October. The supporting cast is perfectly watchable with occasional flashes of brilliance – I especially enjoyed Clive Bonelle’s unlucky hitchhiker and John ‘voice of K9’ Leeson as the owner of a League of Gentlemen-style local shop.

The real credit, though, must go to Ian Vernon. A photographer and short-film maker of long standing, his varied responsibilities with Rebels saw him direct, write, produce and edit the entire film as well as compose and perform part of the score and handle all the visual and auditory effects. When funding bids failed he remortgaged his house to co-bankroll the project with Executive Producer and generous financial contributor Julie Monfils, and he is now tirelessly promoting it whilst working on his next project, The Best Little Whorehouse In Rochdale. The Ibiza Film Festival recognised his achievements by awarding Rebels the prizes for Best Cinematography and Best Soundtrack (a riot of Erik Satie and other quirky pieces), and also acknowledged the spunky lead cast with a shared ‘Best Supporting Actors’ prize. All were emphatically well deserved.

At the time of writing, Rebels Without A Clue has yet to secure a UK distribution deal. Rest assured that we’ll keep you posted – for fans of classic British comedy, this is a must-see.

You can also check back soon to read our exclusive interviews with writer-director Ian Vernon and leading lady Cat Dowling! Watch this space…

Previous: A Matter of Life and Death
Next: Napoleon Dynamite will be TV Series! Gosh!

Interview! We talk to Rebels Without a Clue writer/director Ian Vernon