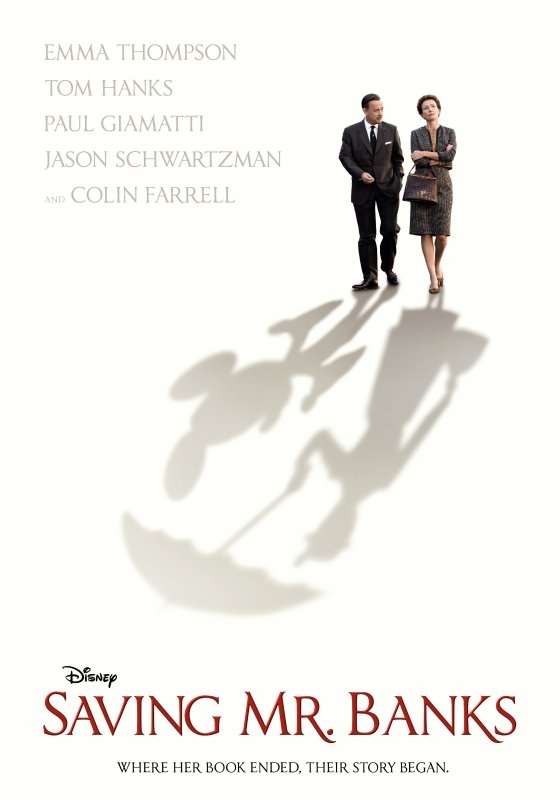 Mary Poppins — at least, Disney’s Mary Poppins — is a classic, and one that has continued to enchant both children and adults throughout the intervening years. The songs are timeless, the performances are charming and the animation is beautifully integrated. P. L. Travers’ series of source novels, on the other hand, have proven rather less enduring, and as John Lee Hancock’s film would have it sales of the stories were already drying up as early as the 1930s. Nevertheless, Disney have decreed that the corresponding chapter in their history is worth revisiting, and here dramatise the film’s difficult development, not least the studio’s decades-long struggle to acquire the rights.

It seems that Mrs. Travers (Emma Thompson) was reluctant to sell her character to Walt Disney (Tom Hanks) for fear that she should be softened, reimagined and — worst of all — animated. Poppins (“never just Mary”) was incredibly close to her creator’s heart, and stemmed from a troubled childhood that left her mother broken, drove her father to drink and led to Travers herself disowning her free-spirited Australian identity. She is an intriguing character: how does her own creative process work, and how does she reconcile her authorial flights of fancy with her disregard for Disney’s own works of art?

That Saving Mr. Banks is light, slight and superficial is not in itself an issue — many perfectly decent films are — but it becomes rather more problematic when your lead character spends much of the movie denouncing Disney for being just that. Finding an early draft of the film to be heartless, Travers storms out of the room determined that her creation, given all that it represents, stands for more than fluff and frivolity. One wonders what she would have made of Saving Mr. Banks, a film which seems to commit many of the crimes with which she once charged Disney’s Mary Poppins: Whereas their adaption of her books made Poppins a friendlier figure, this film takes the real life hardship, trauma and tragedy that fed the author’s imagination, and turns it into something just as happy-go-lucky.

Thompson, who showed her admiration for the original film by adapting the thematically similar Nurse Matilda as Nanny McPhee, does a decent enough job as the terse Mrs. Travers, but it is not a performance that comes across as particularly honest or true. Indeed, she often feels — rather blasphemously — like one of Walt Disney’s cartoons. She is so far removed from Annie Buckley’s young Helen Goff, in fact, that they might as well have been playing different people, and whereas a more interesting film might have tried to bridge that gap by probing further into the reasons behind Goff’s crisis of identity the filmmakers instead focus on the rather more flimsy subject of creative development. But the creative process is deeply personal and unknowably complex, and not something that can be tackled with a few fleeting flashbacks to dropped pears. More importantly, it isn’t particularly dramatic, either.

There is admittedly a lot to like about Hancock’s film: the supporting performances are strong, with Paul Giamatti standing out as chauffeur Ralph; the art direction, production design and costumes are all astonishing, if hardly authentic; and Richard M. and Robert B. Sherman’s songs are as delightful as ever, even as sung by Jason Schwartzman. Ultimately, however, Saving Mr. Banks is all sugar, precious little medicine.