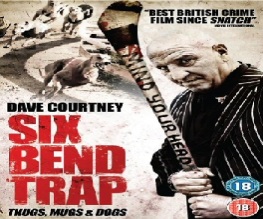 Stumbling along after three stooge-like, council-estate characters, the plot of Six Bend Trap develops around a very likely scenario whereby in order to avoid their demise at the hands of the ruthless, morally-devoid magnate Gordy Metcalf (Courtney), Danny (Owen), Daz (Daniel Poyser) and Rusty (Ian Edwards) must train a greyhound to win a match-race at the Peterborough final. The final is run over Fengate’s six bends – hence the richly evocative title Six Bend Trap. The crime comedy/crime drama is smorgasbord of very real criminal activities – from unashamed shock tactics that appear shamelessly…flaccid, to seemingly earnest attempts at realism that come across as little more than contrived, cockney caricature.

A merry band of overly characterised parts do their darndest to feign the hardened grit of gangster-ridden narratives but the film’s creator and writer Mike McCarthy – whose television forays include Boys From The Blackstuff and Spender – claims that it is not a gangster film. Rather, the tortuously inorganic storyline is submerged within the corrupted sub-culture of greyhound racing, not gangsterism. So essentially, the film is not a gangster film, but a pseudo-gangster film. Add to that the recent decision to change the name from Six Bend Trap to Thugs, Mugs and Dogs – a title that bears an uncanny syntactical resemblance to Guy Ritchie’s work about (real) gangsterism – and it becomes difficult not to suspect that this is a film desperately craving street-cred, but unwilling to admit (or earn) it.

The film has been bizarrely billed as a cross between Lock, Stock and Two Smoking Barrels and The Full Monty, but in fact exhibits nothing of the frenetic pacing and cracking banter a la Ritchie, nor the gritty social commentary inherent in the dark, albeit comic, work of Peter Cattaneo. Instead, the 125 minute gag-reel that is Six Bend Trap simply vacillates somewhere between interminably excruciating and excruciatingly interminable.

It should be laughable, but it’s just too painful to smile. 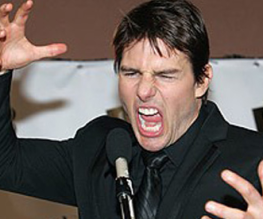