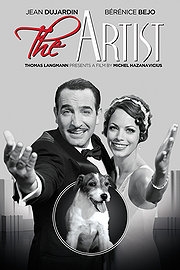 The year is 1927, and the movies are big business. In Hollywood – Hollywood Land to be precise – film studios are booming; the people are flocking, the cash is rolling in and no-one is benefiting more than George Valentin (Jean DuJardin): leading man and beloved global hearthrob. With his almost cartoonish good-looks, exquisite attire and roguish grin adorning every billboard in the nation, he’s a man enjoying the very height of dizzying stardom. We meet him at the opening of his most recent silent film A Russian Affair, and it doesn’t take long to see that George lives and breathes for the acclaim of his audience. Charming the very life out of every room he enters with a wide grin and cocked eyebrow alone, nothing can ruffle his mesmerising cool. When a bright-eyed young fan named Peppy Miller (Bérénice Bejo) accidentally stumbles into him in front of the world’s press, he takes it – and her – happily in his stride; the dazzling pair make front pages around the world, and the chance encounter helps the passionate actress-in-training land a role as an extra on George’s new film. Evidently taken with her youthful charm, her effervescent energy and boundless admiration for his work, George cannot help but find himself drawn towards Peppy, and she to him. But George is married, albeit unhappily, and so all he can offer Peppy is a kind word, a little advice and the smile that made him a star. The times they are a changing though, and with the invent of the Talkies – an innovation practically created for fizzing young starlets like Peppy – just around the corner, it may be that George’s protégé may soon leave him and his silent, golden era far behind… It almost feels strange to attempt to convey the deliciousness of The Artist in words, seeing as its the lack of them in the picture itself that makes it so wonderful. Expertly guiding the audience through its silent story with unfaltering confidence; the combination of wonderful performances, gorgeous cinematography and an achingly beautiful score mean that not a single moment feels wanting. Jean DuJardin is utterly dazzling as George Valentin, a man whose worth has always relied on his ability to charm wordlessly – on and off camera. His arrogance at a new technology he believes is worthless, his refusal to listen to the calling of an inevitable future and his desire to remain true to an art form he sees as pure all feed into a complex and ultimately tragic protagonist; perfectly embodying the sadness of giving up a gently glimmering past in favour of a noisy, uncertain future.

Peppy, by contrast, is a girl who is not afraid to talk. Brave, beautiful, enthusiastic and endlessly talkative, she is the youth that George dismisses so quickly, and the force he has no chance of defeating. But this film is nothing if not a love story, and the urgent bond the two form so quickly cannot be broken by anything as simple as change. Peppy’s wide-eyed wonder at George’s talents will never fade, and even as her star rises she’s desperate to help him as he once helped her. But can George bring himself to let her? And is there more to George’s dismissal of his place in cinema’s future than first meets the eye? There are so many wonderful strands to The Artist that repeat viewings are almost mandatory. The archaic nature of old-fashioned male pride, American influence over global cinema, the almost unnoticeable but crucial losses that come with ceaseless addition – all glitter gently in the background of a disgustingly compelling drama, enhancing rather than distracting from the relationships they surround. With dialogue-based humour out the window, instead we are treated to sequence upon sequence of wonderful, gentle physical comedy that build up to the kind of heart-felt pathos almost entirely absent from Hollywood’s current output. By telling its story using the medium that our flawed hero feels such passion for, we too cannot help but fall in love with the cinema he represents, and mourn its demise even as we acquiesce to its place in the history books.

But at its core this film is no tragedy, and the triumphant celebration of a story well told seeps through every frame, reminding us that no medium is obsolete as long as it can continue to bring us joy. The Artist is not just a exquisite hat-tip to a style long forgotten, or even a love story about two people caught between eras; it is a dazzling demonstration that the very best of the human condition will fight its way to the top, no matter what method it employs. Go and watch The Artist, for goodness sake. Go, watch, and wonder at just how eloquent wordlessness can be.

Previous: Paranormal Activity 4 gets a release date
Next: London film events in January 2012