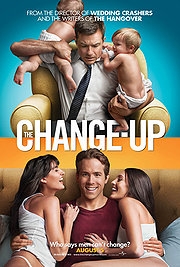 Finding someone who was willing to go and review The Change-Up proved to be an arduous task this week; in the end, we played rock-paper-scissors and I found out the hard way that scissors don’t beat rock. Why were we all so staunchly against this Bateman-Reynolds viewing experience? Because the trailer, quite frankly, made our souls die a little bit inside. In fact, it gave us the impression that this was going to be an awful film with no redeeming features whatsoever. And, sadly, this was exactly the case.

The film is based on an old gimmick; Jason Bateman, a happily married lawyer, meets with his playboy buddy Ryan Reynolds to berate his life and moan about his babies. And his wife. And his job. And everything, just everything. God, he’s just so busy all the time; he can’t even go to the toilet without being interrupted! Does any of this sound familiar to you? Ryan, on the other hand, is seemingly unhappy with his single guy lifestyle; after a night of heavy drinking, the two become exceedingly jealous of one another. So much so that, whilst peeing into a fountain, they literally wish their lives away. And (get this) it’s a MAGIC FOUNTAIN which means that, when they wake up the next morning, they’re trapped in the others’ body! “Who says men can’t change?” Oh Lord, give me strength to overcome the incessantly bad puns. Ahem. As I was saying, this film takes your basic body-switch formula and adapts it; they are unrelated and both are the same age. This means that we get plenty of sex and toilet humour thrown into the mix. Everybody loves sex and toilet humour, right? Not really, no. And, if we did, we’d only like it in small doses; it’s too much for us to expect to see Leslie Mann half-naked as she struggles to void her bowels of spicy curry: “I need to lay off the Thai food.” No Leslie, you need to lay off the bad film roles; we know you’re a good actress. We’d even hoped that you’d pull an Amy Adams on us and go on to star in some gripping drama and unveil your Oscar-worthy glory. Not anymore. One thing I will say is that it was quite pleasant to see Jason Bateman in a pretty out-there role for him; he starts off in his usual stiff upper-lipped good guy but, when he’s possessed by Ryan Reynolds, he’s allowed to be someone completely different. It’s a bit wacky and, with a better script, it might just have worked. Ryan, on the other hand, kind of bored me; his character was just so grossly unlikable that I was quite hoping something very bad would happen to him. I suppose it was better than his performance in Green Lantern (anything is, to be fair!) but it’s still a far cry from his Buried awesomeness. Do we need to put you back in the box Ryan?

Am I being unfair? Possibly. The film hasn’t been released under any pretences; the most hilarious gags are, after all, included in the trailer for all to see. It does work within its own ‘dick flick’ spectrum but, on the whole, this B Movie lacks the comic finesse of The Hangover or American Pie. Instead we get something which tries very hard to gross us out and amuse us simultaneously, misfires horribly, goes on for far too long and seems to lack the obligatory ‘lesson learned’ conclusion of all body-swapovers. Without Bateman, this would have been an absolute disaster. As it is, it’s more of a clogged toilet than a Tsunami. Previous: Jackie Earle Haley to star in Lincoln
Next: Elton John to produce a film… about himself?