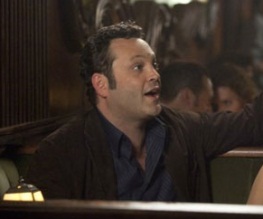 The Dilemma sets itself up as a lovable rom-com with the emphasis firmly on the comedy side of things. Ronny (Vaughn) and Nick (James) are best friends and business partners, who have a once in a lifetime chance to close a deal with Dodge. The only problem is, Ronny has seen Nick’s wife Geneva (a scarily evil Ryder) cheating, and has to choose between coming clean to his friend, or closing the deal.

From start to finish, this film is a vehicle for Vince Vaughn to do what he does best- silly puns, fast talking and a bit of slapstick. His character is the most believable, despite scoring with the likable Beth (Connelly) who seems way out of his league. But then he finds himself in a sticky situation which many of us may have been in. Do you tell your best bud about his cheating wife, or do you subscribe to the it’s none of your business shtick and keep quiet? Ronny tries to do both and predictably things go downhill from here.

This is the ‘dilemma’ of the title, and it is made all the more difficult when Geneva turns into a psycho and threatens to lie to Nick if Ronny tells him the truth, putting all the blame onto Ronny’s shoulders. A round of applause must go to Winona Ryder for making this both the best bit in the film and the most believable- she does evil bitch from hell very well indeed, and oddly, seems to enjoy it. Hmmm. We may have found a new role for her to be type cast in. Unfortunately, this slight satanic undertone cannot make up for the rest of the movie being one giant walking cliché. From the Bridget Jones-esque ‘man fight’ between Ronny and Zip (Tatum) which includes fish murders, falling out of trees and flaming deodorants to the ‘grown up mature woman falls for immature boy’ plot line, there is nothing in this we haven’t seen before.

The most ludicrous plot twist has Nick going to a Thai ‘massage’ parlour every week, which just doesn’t sit with his hapless geeky character. Similarly, the contrived affair between smart businesswoman Geneva and tattooed skater boy Zip is beyond the realms of belief, but it does give the likable Tatum the chance to shine in a cameo role. For a comedy, there is only one laugh out loud moment, and for a romance, the two couples are so ill matched you feel as if you are watching two warthogs cavort with a couple of peacocks. Add in the predictable cringeworthy moment, the predictable awful toast and the predictable happy ending and you can see where I am going with this.

If you are a huge Vince Vaughn fan, go see The Dilemma. He is the star of the show, with the others relegated to bit parts. But if you don’t love Vince Vaughn so much you could reach through the screen and give him a huge cuddle, avoid this one. For a comedy, it just isn’t funny enough.

Previous: WIN: 3 x THE ASSASSIN NEXT DOOR on DVD!
Next: Foreign films that should’ve stayed foreign