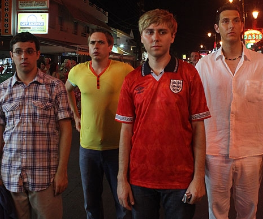 Interestingly enough, there was never supposed to be an Inbetweeners Movie. Writers Iain Morris and Damon Beesley had always planned to write a teen-holiday comedy of some kind, but didn’t associate the idea with their ridiculously successful Inbetweeners series until, well, in their words: “We thought ‘why not?’ We’ve already got these four teen characters, loads of material, and they already have an inbuilt audience; which will make securing financing easier; and so we took the lazy way out.” Just something to bear in mind.

So, best mates Will, Simon, Jay and Neil have dragged themselves through their final, sexless days at school, and are looking forward to bright, vagina-filled future. Will’s off to uni, Simon’s just been dumped by love-of-his-life Carly, Jay’s sticking tight to his favourite words and Neil’s dad’s still gay. After looking blankly at each other for about 10 minutes someone says “HEY LET’S GO TO MALIA!” and everyone else goes “YAYYY!” A fleeting couple of shots of Greg Davies swearing at some children later, THE LADS ARE ON TOUR. What could possibly go right?

Now. The problem with The Inbetweeners Movie is that it’s a gross-out teen flick disguised as a continuation of a cleverly written, nuanced and original TV series. Rather than sticking to the harrowing every-day truths of life as a teen, the Hollywood LOL-machine kicks in as soon as the plane lands at its invariably underwhelming destination. From the moment Laura Haddock trots glowingly onto the screen and doesn’t immediately reject each and every member of our much-loved-but-powerfully-average-looking team, the cracks begin to show. Just so you know, this is what Laura Haddock looks like: and this, lest we forget, is her apparent love interest: And therein lies the problem. The Inbetweeners burrowed dirtily and gleefully into our chests because it was a very, very slightly heightened, deeply more hilarious version of lives we all led as teens. It worked as half an hour chunks for the same reason – it was resonant because its of banality, and the short running time squeezed the edges just enough to pack in whatever action was necessary. But to sustain interest over an hour and a half, the game has to be upped. And there are only two ways to up the game in the world of gross-out comedy – a) you write better jokes, or b) you make lots of unlikely things happen. And thus we are returned to the problem of the beautiful Laura Haddock. The narrative arc, unused to working so hard for such a long time, begins to buckle and complain about forty minutes in, and we’re left grasping onto the solitary thread of Some Boys Wanting To Have Some Sex. Yes, that was sort of the overarching theme of The Inbetweeners as a whole, but it was nice that that simmered away in the background, whilst other, more mad things took the foreground episode by episode. With the space afforded by a longer feature, its the characters we love that are left to fill the void, forcing our lads into bloated, cartoonish, stupid and rather less loveable versions of their smaller screen counterparts. Of course Jay is still a dab hand with the word ‘clunge’, Neil does his dancing, Will smirks in a worried way and Simon, well, Simon sells all his clothes for some reason – it’s not without charm, of course its not, but it’s lost the naturalism that made the mad stuff seem so wonderful.

It could be that had this film arrived on the scene without dragging its history behind it, I would have reviewed it more favourably. It’s silly, it’s occasionally cannily judged, it’s easy watching and at the end of the day, it’s perfectly fine. But considering the boys’ legacy as some of the best characters to come out of the UK comedy scene in recent years, it’s just a shame that by the time we witness their strangely saccharine airport goodbye, I was glad to be rid of them.

Previous: Master and Commander, and other seafaring films to watch drunk
Next: Cowboys & Aliens

The Inbetweeners Movie gets a sequel