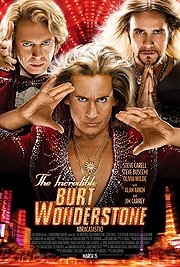 The Incredible Burt Wonderstone has a simple enough aim: to be funny. But it’s also a film about childhood, nostalgia and contempt for modern entertainment. Let’s face it, these days, we don’t want boring old rabbits out of stupid old hats, we’re not satisfied ’til the guy on stage drills a hole through his head. That’s right ladies and gentleman: magic just isn’t magical any more. 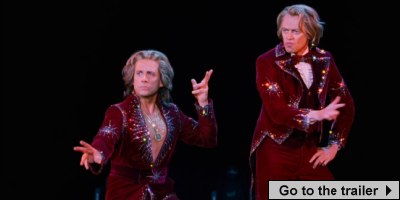 The film starts with a retro 80s flashback. Geeky, 12-year-old Burt is told “No one likes you. No one will ever like you!” by a mean school bully who punches him in the stomach and makes him eat bits of tree. Cue insecurity complex and desperate need for escapism – and on his birthday as well! His single working mom has left him some cake mix (there’s a ‘loved but largely abandoned as a child’ vibe) and a present: it’s only Prince Holloway’s Magic Kit! “Everyone loves a magician! And they’ll love you too!” says the slick Prince Holloway (Alan Arkin) on the instructional VHS before a real live dove flies out of his mouth. Magic: the ultimate insecurity complex/desperate need for escapism antidote. In the school cafeteria Burt wows the equally geeky, 12 year old Anton with a nifty disappearing handkerchief trick and the two become partners.

Cut forward thirty years and cue montage of glitzy name-in-lights Vegas stardom. Burt Wonderstone (Steve Carell) and Anton Marvelton (Steve Buscemi) are Vegas head liners in skin-tight velour catsuits and too much fake tan. But their show ‘Burt and Anton: A Magical Friendship’ doesn’t convey the bitchy back-stage reality. The fame and man scent has gone to Burt’s head. He’s a mean, misogynist womaniser who just doesn’t appreciate the joys of magic any more. Burt’s got it made. He’s the most famous, adored magician in Vegas and nothings going to stop… But wait! There’s a new guy in town. The long haired, tattooed Steve Grey (Jim Carrey) is a new street magician whose act ‘Brain Rapist’ consists of him sleeping on hot coals, cutting open his face and holding his urine for a week. And the crowds love it! Burt has to get into the 21st Century, but when his fame and friends have gone he is forced to question whether he’s really so incredible after all. He needs a bit of help from his old pal Prince Holloway… 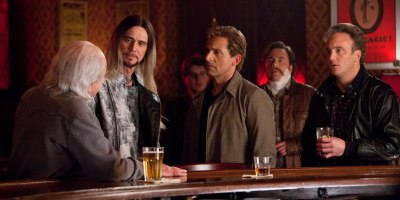 Okay, so The Incredible Burt Wonderstone is not as consistently funny as one would expect from its all-star cast -parts barely raise a chuckle and there’s some clumsy, unimaginative plays for cheap laughs. But there are a few magical moments that make it all worth while: the Burt Wonderstone vs. Steve Grey ‘Magic off’ at a children’s party (which ends in the tragic death of a puppy), Prince Halloway’s darkly comic final ‘disappearing act’ and the brilliantly absurd finale when Burt and Anton complete their most daring (and highly illegal) trick to date. Steve Carell does what he does best; he is great as exaggerated, camp, arrogant Burt but really comes into his own as softer, subtler, human Burt. Indeed, some of the loveliest moments are when he’s rediscovering his childhood fascination with magic in an old folks’ home. Steve Buscemi and his plasticine face usually have a knack for being funny as characters who aren’t meant to be funny (eg. as the criminal sociopath in Fargo who encourages the guy who’s strangling him to “smoke a fuckin’ peace pipe!”) but he has far less memorable here, largely because he doesn’t have a huge amount to work with. Jim Carrey, as per, is all shouty and rubbery faced – but that’s why we love him, so he doesn’t disappoint.

The Incredible Burt Wonderstone is just the right amount of silly and sensitive. It has all the ‘frat pack’ gross out absurdity you’d expect but it is enjoyably calmer and subtler than Anchorman. There are points when it manages to provide a worryingly recognisable portrayal of modern audiences – the crowds get bigger and more excited the more disturbing and humiliating the tricks become. But, social commentary aside, it’s all just good fun. Well worth a watch for any ‘frat pack’ fanatics.

Previous: The Rock joined by Rufus Sewell in Hercules
Next: Kate Winslet confirmed for Divergent