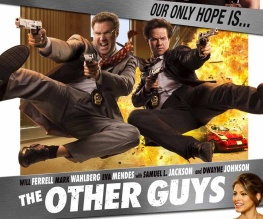 Will Ferrell, once the toast of Saturday Night Live, hasn’t made a watchable film for at least four years – and after seeing the trailer for The Other Guys five or six times I was dreading what looked like another smug and contrived romp through the lowest common denominator of blue-collar humour. How wrong I was. Easily rivalling Ferrell’s most critically successful films, The Other Guys is a frothy and original sideways glance at the last umpteen years of ‘buddy cop’ movies, with some superb performances riding on a well-crafted script and spectacular visual effects. More believable than Old School and more upbeat than Starsky and Hutch, it’s the very definition of a cinematic guilty pleasure.

Detectives Danton and Highsmith (Dwayne ‘The Rock’ Johnson and Samuel L Jackson, god bless their gleaming shades) are the toast of the NYPD, causing untold millions in property damage as they get their macho on in gunfights and car chases. However, when they die in a stunt that went horribly wrong, it’s up to two inept desk jockeys to fill their sweaty shoes and defend the city from crooked financiers and malicious South Africans.

Allen Gamble (Ferrell) is a quiet and mild-mannered police accountant who wants nothing more than to be left with his spreadsheets and his beautiful wife (Mendes), but his hot-headed partner Terry Hoitz (Wahlberg) yearns to be on the street cookin’ fools. Desperate to revive the career he put on hold when he accidentally shot a Major League baseball player, Hoitz drags a protesting Gamble onto a high-profile investigation – and when their captain (Keaton) dismisses the case as a waste of time, the ‘Other Guys’ are the only thing left between the NYPD and financial oblivion.

The Other Guys is obviously a massively derivative film, but it manages to feel more like an extended homage to every inept cop movie ever than a shameless 107-minute rip off – the many, many references to classic police action and comedy films are disguised just enough to be allowable. Starsky’s scarlet Gran Torino becomes Gamble’s identically-coloured Prius, Shaft’s quiet menace is shamelessly mocked by Highsmith’s sudden explosions (“If I wanna hear you talk, I’ll shove my arm up your ass and work your mouth like a puppet!”) and the explosive stunts draw on everything from Bad Boys to Die Hard.

The real surprise, though, is that even once you get through the bombs and guns and homeless guys having an orgy in the Prius (no, really), The Other Guys is still genuinely enjoyable. The script is original and very funny, with genuinely touching moments as well as enough cheap gags to keep the slightly guilty laughs coming. My favourite line for sheer absurdity is towards the end of the film during a pivotal arrest – a detective (whose whole role had been building up to this moment) looks down his gun and growls “I hope you like hospital food. And penis.” I felt dreadful for laughing, but the film is very well-structured in that the low-rent moments stop anything getting inappropriately serious.

Supporting appearances from Steve Coogan and Michael Keaton (who may well enjoy a career revival off the back of his pitch-perfect performance) were very welcome, and both leading men were unquestionably at the top of their game – Wahlberg’s barely-controlled menace and frustration are delicious, whilst Ferrell’s unexpected back story (wait and see) was the perfect catalyst for his funniest performance since Anchorman. If this is the standard we can expect from him from now on, I promise I shall stop wincing whenever his ridiculous face appears on the trailers.

Previous: Film lovers of London UNITE! The Scoop, 7.30. Be there or you know what!
Next: Phoenix comes clean to Letterman