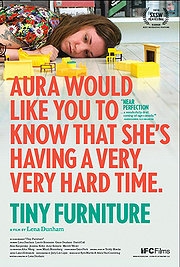 “He’s kind of a big deal on YouTube,” boasts Aura (Lena Dunham) of the quasi-boyfriend she’s acquired. When we finally see Jed’s (Alex Karpovsky) big deal of a video, it’s a clip of him quoting Nietzsche while sitting on a rocking horse. The note of apologetic shame in Aura’s proclamation suddenly makes sense. Tiny Furniture lampoons the same generation of internet-savvy, cultured but aimless hipsters that it springs from, puncturing its pretentions and illusions whilst remaining sympathetic towards it.

Director and star Lena Dunham, currently prepping a television series for HBO, uses her second feature to reflect on her own life with a heady mixture of humour and self-reproach, crafting a familiarly peculiar kind of esoteric independent comedy that never produces big laughs, but uses offbeat, reticent beats to build a steady amusement at modern existence.

Aura returns to her mother’s (Dunham’s own mother, photographer Laurie Simmons) apartment in New York having completing her film theory degree and gathered a few hundred hits on her own awkward YouTube video. Her precocious little sister Nadine (Grace Dunham – you guessed it, Lena’s sister) gets busy showing her sister up by belittling her own achievements: “poetry is a very stupid thing to be good at,” she tells her sister stoically. Reuniting with her childhood friend Charlotte (Jemima Kirke), who’s remained in a rich teenage stasis (and has a lingering British accent bordering on the parodic) Aura settles into a life halfway between regression and stability, clueless as to what she wants or needs to move towards. Tiny Furniture charts a post-university confusion in a fashion not dissimilar from the more familiar mid-life crisis narrative. Aura drains her mother’s wine cabinet when left home alone for a week, has an odd sexual encounter in an unstable metal pipe, and lies lumpenly “sweating the bed” (as Jed uncomfortably points out) until the late afternoon. Dunham creates a vivid sense of awkwardness, crafting a strangely airless atmosphere to heighten the fractiousness of her dialogue and using square photographic framing to separate and contrast the various characters bumping through Aura’s life. Though it never trips into the disconnected visuals of something like Garden State, a running joke involving a wall of indistinguishable white cabinets falls on the same plain of comedy as Zach Braff’s infamous wallpaper shirt. Casting almost exclusively from among her family and friends, Dunham bravely moulds fiction and reality, creating a softly amusing mood of playful farce – you can feel the fit of giggles being suppressed when Dunham plays a combustible meltdown with true Hollywood theatrics. But the friction between Aura and her family feels startlingly fresh, with the stilted interactions loosening up as Aura, for better or worse, starts to reacclimatize herself to the people around her. Dunham performs with a sympathetically pathetic edge, as eager to puncture her own character’s pretensions and illusions as those of the other characters – swinging believably between contempt for and a desperate need of those around her. Tiny Furniture is peppered with that kind of neurotic peculiarity, keeping its esoterica to believable levels – I think you’ll all recognise that there’s only so long you can pretend to love a hamster so much that you’re prepared to store it next to your frozen peas.

Dunham anchors her coming-of-age narrative by returning consistently to Aura’s shameless readings of her mother’s teenage diary, where she gradually learns they are not as dissimilar as she’d hoped. Tiny Furniture never comes to any grand conclusion or revelatory statement, but, though her narrative ideas are still limited, Dunham announces herself as a fresh neurotic voice that could prove revelatory in the near future.

Previous: Resident Evil: Retribution gets a teaser..
Next: TGIM! London Comedy Film Festival at the BFI