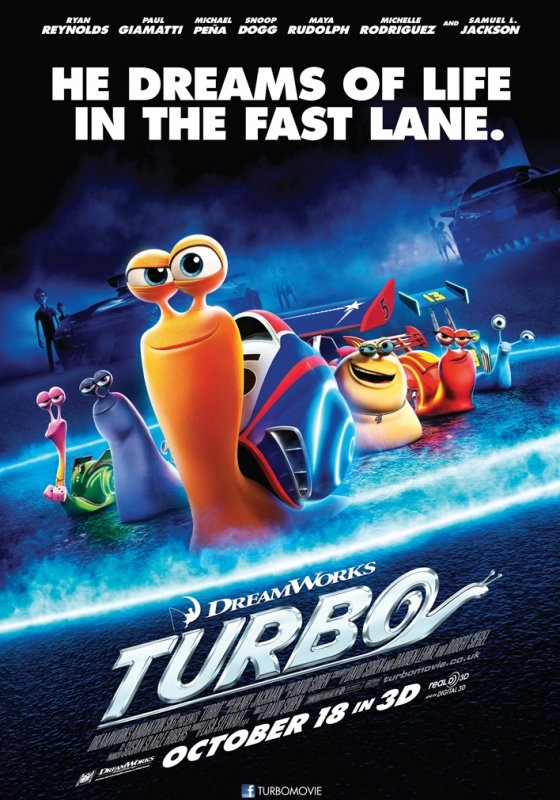 Theo (Ryan Reynolds), a small garden snail from Venice, California spends his days working at The Plant and his evenings watching races on a television in a nearby garage. His racing ambitions aren’t appreciated by his older brother, Chet (Paul Giamatti), who refuses to address him by his self-appointed nickname, Turbo. Frustrated by his inherent lack of speed, Turbo travels to the local race track, making a wish that is soon answered when he is sucked through a car’s engine and exposed to nitrous oxide. When Turbo and Chet are captured by a snail-racing taco truck driver (Michael Peña), the speedster’s newfound abilities lead Tito Lopez to enter him in the Indianapolis 500, where he will race against his hero, Guy Gagné (Bill Hader).

From DreamWorks Animation, Turbo is the second product of their partnership with 20th Century Fox (after The Croods), and their second financial failure in as many years (after Rise Of The Guardians). Turbo originated from a company-wide competition that saw employees submit ideas for a new feature film. Conceptualised as Fast and Furious with snails, the film was never going to be much more than a premise, but to his credit first-time director David Soren fleshes out the idea – his own, as it happens — as much as he can.

Turbo has its moments, with the animators often working to compensate for the relatively lacklustre script. The acquisition of Turbo’s powers is handled particularly well, and it’s hard not to at least smile as the snail’s face contorts to the beat of “What’s New Pussycat” or his eyes light up with the glare of full beams. The script’s only noteworthy contribution to the film’s success is in its naming of Ben Schwartz’ character, Skidmark, but while the dialogue is never laugh-a-minute the story is almost too clichéd to fail. Even the animators struggle at points, however, and for the most part Turbo is an unremarkable succession of dull lines and interchangeable… well, snails.

The main issue is that Turbo lacks a King Julien or Snotlout. Reynolds is enthusiastic enough, but the voice cast is unusually weak for a DreamWorks picture. Not even Samuel L Jackson and Maya Rudolph can breathe any life into the racing snails, while Michelle Rodriguez, Richard Jenkins and Michael Peña make nary an impression between them as the main human characters. Hader is suitably untrustworthy as French-Canadian celebrity driver Gagné, but the most memorable character by some margin is manicurist Kim-Ly (who puts the “nail” in “snail”), but only by virtue of Ken Jeong’s piercing, insufferable schtick.

Turbo is not a good movie, and marks something of a step backwards for a studio on the rise. That said, it’s the best film about racing snails you’ll see this year, and with a few solid laughs under its shell that’s not entirely faint praise.