What To Expect When You’re Expecting 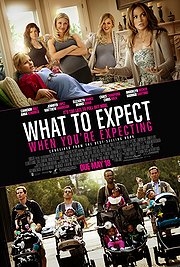 Women getting fatter, eh? You know what’s interesting about it? Everything. The way their stomachs look different, how they walk funny, how sometimes things are inconvenient for them because of clothing and doors and getting out of chairs. Finally, the makers of What To Expect When You’re Expecting have cut out the deeply boring section of child-rearing – like, people and relationships and actual children and stuff – and instead have dedicated an entire film to women getting fat, and men watching women get fat. Oh, and to be fair, Jennifer Lopez’s character has decided to adopt so no fatty fat fat for her, but that’s only because she’s physically incapable of doing “the only thing a woman is supposed to do”. That’s a direct quote. If it helps, the lighting on her grief-powdered face really is lovely at the time. So, Jennifer Lopez plays that character in Maid In Manhatten only she’s a photographer now, and she’s married to the sexy bloke out of Love, Actually, only this time he’s not wearing glasses. They are inextricably linked to Cameron Diaz’s The Holiday character because they both have heads and she’s ended up with her womb all doused with the juice of Glee’s Mr Schu. Effie from The Hunger Games has (a bit) toned down her hyper-active nonsense and is ALSO a sprog-kiln, having gotten knocked up by the one that Melissa McCarthy fancies in Bridesmaids. Meanwhile, his dad is Dennis Quaid, and someone is pregnant near him. Also, more people are pregnant. With ALL THESE PREGNANCIES, you wouldn’t be completely outta line in thinking that SOME PEOPLE are going to have SOME BABIES. Spoiler alert: they do! And then the film ends. There’s a possibility that this is an exercise in the striking comforts of numbing inevitability, but there’s a bigger possibility that Chace Crawford will turn out to be really dreamy after all. Aren’t we sick of this thing now? This flat, glossy, shitty-go-round sub-genre where celebrity cameos cease to add icing to hearty cinematic fare and instead make up the entire meal – pushing our heads into glottal-stoppingly sickly synthetic tat until we choke on close-ups of voluminous hair and smooth cheeks and we die? Why aren’t we sick of that yet? Not only is What To Expect When You’re Expecting dreadful for all the reasons these films are always dreadful, it manages to actually under-step films like Valentine’s Day by refusing to engage with the entire “inter-weaving storyline” trick that has been the plaintive justification of this nonsense so far. None of these bodies who say words have anything to do with one another, is the thing. One of them is on TV (that’s Cameron Diaz, whose dishearteningly robotic face now resembles a very nice bowl with a snout attached), so sometimes OTHER CHARACTERS see her on TV. That doesn’t count. Especially as you can almost feel director Kirk Jones pointing at you smugly from behind the character and gently mouthing the words ‘clever Kirk’ as he uses the shot as a segue into YET ANOTHER fucking conversation about how nice pregnancy is/how difficult pregnancy is/how nice parenthood is/how difficult parenthood is. It’s so depressingly lazy, even by this cut-and-paste genre’s standards, that by the time they’re all doing that one Giving Birth scene Hollywood have kept in stock for the past 20 years, the only thing you’re hoping for is that someone, anyone, gets all Rosemary’s Baby on this shit. Hoping, rather than expecting, obviously. When a film disappoints even by the standards of the most brain-decomposing genre on the current cinematic skyline, you know there are some terrible forces at work. Sure, there are plenty of other gripes to bemoan – the fact that no single-sex couples even get a whiff of a look in, the fact that there are no single parents featured whatsoever – god forbid, right? – the fact that all women are apparently OVARY MISTY and all men are at best terrified buffoons with ‘you bone it, you bought it’ carved onto their cocks, the fact any emotional manipulation is done via two things – the weather (warning: don’t be in the rain when pregnant, or you will definitely miscarry) and soft guitar music. As I say, there’s plenty to despise. But to be honest, at this stage, no-one asks for genuine heart from these films. No-one expects real joy, real love, well-crafted characters or storylines we care about. We have grown so cynical, so glutted on sterilised glitter-lolz that all we want from this rom-dross is a sweepingly inoffensive, heart-petting hour and half. And yet, even with this in mind, What To Expect When You’re Expecting still utterly fails to deliver.