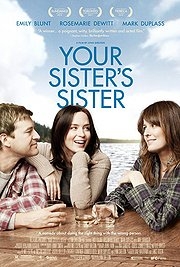 It’s been over a year since the death of his brother, but Jack (Duplass) is still finding it difficult to adjust to the loss. Unemployed and persistently pessimistic, he hasn’t got much to lose when his best friend Iris (Blunt) recommends he take some time to himself in her family’s quiet holiday cottage.  But, when Jack arrives, he finds that the lakeside house is already occupied by Iris’ half-sister Hannah (DeWitt), herself seeking solace after the breakdown of a seven year lesbian relationship. When Iris unexpectedly joins them the next morning, it soon becomes clear that each of the three has their own reasons for wanting to get away from it all, setting the scene for an unlikely triangle of consolation and calamity. As their relationships begin to intertwine, each soon begins to realise that their mistakes can bring them closer to understanding themselves than their achievements ever could. Ask a group of people to base their expectations of a film around the above synopsis and it’s possible they could reach wildly varying conclusions. Three damaged people confronting their emotions in a small country house? It might be a dreary ninety minutes filled with self-reflective monologues and emotional upheaval, or it could be the set-up of a romantic comedy – with plenty of opportunity for playful laughs as the characters take pratfalls into the lake and teach each other to love again.  In reality, Your Sister’s Sister simultaneously reflects neither of these descriptions and both of them at once, the resulting mixture successfully evoking the ebb and flow of life far better than either could alone.  And there’s not a comedy lake stumble in sight. Marking writer-director Lynn Shelton’s return after the success of 2009’s Humpday, it’s likely that Your Sister’s Sister will be deemed fit to join its predecessor among the ranks of young America’s current favourite indie subgenre, ‘mumblecore’. Coined by sound editor Eric Masunaga in 2005 to describe the work of Jay and Mark Duplass (the latter appearing here as Shelton’s lead), the term could seem something of a misnomer to fresh viewers; as the dialogue in Your Sister’s Sister flows back and forth with snappy humour and faultless delivery, it often seems about as far from mumbling as you could get. The key, however, is naturalism.  Making use of character workshops and improvisation, Shelton and her cast create a level of interaction that seems instinctive and unforced.  With each actor having sculpted knowledge of their character’s background and personality, the film’s conversations can take place off the cuff, allowing them to appear unstilted and without the burden of clunky exposition.  Captured by Shelton on handheld camera – often on the first take – the result is lively and real, the trio speaking over each other to interject and never dwelling on unnecessary details (how Jack’s brother died is not mentioned and nor does it need to be).

It may be true that the story veers into ‘suspension of disbelief’ territory during its final act, but it’s the film’s charm that keeps you hooked. And when the cheeky tease of an ending caps off a perfectly judged hour and half runtime, you’ll be too busy smiling to mind.