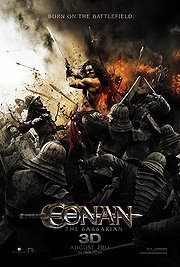 Marcus Nispel’s blockbster epic has finally been unleashed after seven years of production-limbo this week. After two Conan films (Conan the Barbarian and Conan the Destroyer) were released in the 80s, a remake has remained dormant until this year. Will Momoa’s loin cloth fall a cut above the rest? Or more importantly, Arnie’s?

Many moons ago in Hyboria there was an evil mask which granted supernatural powers to its wearer. After years of bloodshed, the Barbarian army managed to break the mask and scattered the pieces across the land in hopes that it would never be used again. Fast-forward a few years where we join big bad warlord Khalar Zym (Lang) and his daughter Marique (McGowan) in their search for the mask to resurrect Zym’s equally evil wife and cause general mayhem and chaos. Unfortunately for a young Conan (Leo Howard), his village holds the last piece of said evil mask. Short story cut shorter, Conan’s village along with his father get mercilessly slaughtered. The majority of the film is set 20 years later and follows a grown Conan (Momoa) in his quest to seek vengeance.

Frankly, the plot is pretty dicey. It almost seems as though Nispel wanted a continuous battle sequence and added in the rest of the movie as an afterthought. The cast run, sail, swim and horse-ride their way through a ridiculous amount of unpronounceable locations within unspecified timeframes, creating obvious loopholes along the way. For example, at one point Conan leaves a ship to trek up some cliffs, ending in some hay-filled barn before exiting into a forest?! Unless Hyboria possesses Narnia-esque qualities, I suspect Conan’s a wizard. This is Jason Momoa’s biggest break yet, after appearing in a variety of TV shows including Game of Thrones and Stargate: Atlantis. Nispel’s Conan was as expected – rippling muscles and male chauvinism in abundance. Nevertheless there were glimmers of likeability, such as when Conan fights to give a group of slaves their freedom; kind of like a whoreier version of Robin Hood. The acting is pretty poor, but with dialogue riddled with clichés and battle roars it’s difficult to shine.

The first scene after the historical montage really sets the tone of the film. We are treated to a suitably barbaric pregnancy in the midst of a bloody battlefield; literally witnessing a blade slicing through the amniotic sac of Conan’s mother’s womb. The gore continues to worsen, reaching a peak as Conan shoves his mighty finger into a bloody hole where a man’s nose once resided. Yet running alongside these realistic horrors are gleams of creativity such as the chilling manner in which the sand men die. Imaginative effects used in the finale also revealed a solution to the problem of the amazing mask (it fails to perform its primary function of staying on your face). It’s difficult to justify complaints because there was no false advertising. It’s not called Conan the Mildly Mannered Gentleman. It’s Conan the BARBARIAN for Pete’s sake. The rather odd relaxing drawl of Morgan Freeman’s narration did raise the classiness briefly, but even he manages to escape after the first half. Perhaps he couldn’t take the overkill of sickening sound effects (skull crunching will haunt my slumbers). Or perhaps the numerous accounts of horse brutality became too traumatising; taking inspiration from Arnold Schwarzenegger’s version of Conan (who punches a horse) Momoa gives one particularly unlucky horse a hearty wallop in the face with a ruddy big chain. In slow motion. Why they thought an audience would appreciate a detailed expression of horse bafflement is beyond me.

If you enjoy the twists and turns of an imaginative plot, intricate group dynamics and subtle character developments, or if you’d simply prefer your food to stay where you digested it, then have a think about avoiding this one.