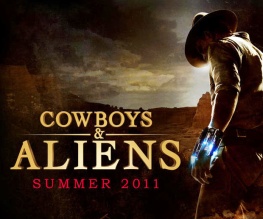 On paper, Cowboys & Aliens sounds more contrived than Sharktopus. There’s this cowboy, right? He wakes up in the desert with no memory but with a shiny bracelet which turns out to be a laser capable of bringing down spaceships – a coincidence which is going to be, blimey, particularly convenient when spaceships turn up and start causing some shit in about half an hour’s time. In the meantime, this cowboy wanders about looking gruff and bumps into OH MY GOD INDIANA JONES and then… hang on. Hang on. We need to go back to basics here.

The year is 1873, and the place is the trackless Arizona desert. A man (Craig) wakes from unconsciousness with a mysterious wound, an even more mysterious gauntlet and the lynchpin of the classic mystery hattrick – amnesia. After battering seven kinds of yee-haw out of some jobbing bad guys and nicking their clothes and horse (hello, period Arnie), the man rides to the nearest town in the hope of finding out just what on earth is going on. Said town is called Absolution, and it’s a bit of a dive – the gold rush has been and gone, and all that’s keeping the town alive is a cattle ranch run by the fearsome Colonel Dolarhyde (Ford), who rules with an iron fist and doesn’t take kindly to being crossed.

Unfortunately, it sounds like our protagonist has done some crossing he doesn’t even remember; Dolarhyde recognises him as notorious crook Jake Lonergan, whose most recent exploit involved stealing some of the Colonel’s gold. Justice is about to be served Western-style when – wait for it – a flight of spaceships turn up and start alternately shooting up the town and abducting its hapless inhabitants. Dolarhyde and his posse are helpless in the face of the invaders, but Jake discovers his gauntlet is a directed energy weapon capable of incinerating pretty much anything that either the Old West or the alien kidnappers have to offer. The humans suddenly have a fighting chance against their extraterrestrial aggressors, but if Jake can’t remember where he came from then the best he and his new pals can do is wait to be fried. Today Absolution, tomorrow the world… A lot of the time, Cowboys & Aliens is good fun. Managing to treat both disparate genres with respect and avoiding the temptation to camp things up à la Men in Black, director Jon Favreau has a reasonable stab at balancing the frankly absurd opposing forces of a) dour, understated Westerns, b) tense, high-spec alien thrillers, c) taciturn action hero Daniel Crag and d) legendary AND taciturn action hero Harrison Ford.

The premise requires reasonable suspension of disbelief, sure, but no more than you’d expect – in fact, the idea of an initial scouting mission touching down somewhere out of the way makes a lot more sense than the classic motif of mother ships descending on every Earth capital. The script is tight and acceptably free from plot holes, the two leads both thrive on their custom-made parts (although Ford’s borderline-moving portrayal of gruff ex-soldier Dolarhyde is criminally underused in favour of Craig’s tedious grump) and Sam Rockwell is really rather funny as the more or less obligatory doleful bartender.

However, it’s not all good. As our friend and colleague Papa Neish points out in his excellent review, the nay-sayers who claimed Iron Man 2 was too silly little knew what damage they were wreaking within Favreau’s tortured mind. A little self-awareness, a little humour would have gone a long way to improve Cowboys & Aliens – as it is, the spectacle of Daniel Craig earnestly mugging away through scene after inexplicable scene (just you wait to see what happens to Olivia ‘oh, am I in a film?’ Wilde) feels somewhat akin to sitting through an interminable school play and then being expected to weep with sheer wonder when it plods to its totally inevitable conclusion. There’s fun to be had with Cowboys & Aliens, but not nearly as much as there should have been; see it if you want, but do consider some alternatives. If you want to see a reinvented, gleefully self-aware sci-fi film which pits an ill-equipped gang against an alien army on a Manifest Destiny quest, then wait for the DVD of Attack the Block (it’s out next month). If what you’re really interested in is a film starring a trained ape (who hasn’t ever played James Bond) with some CGI tricks up its sleeve, Rise of the Planet of the Apes is still in theatres. If, however, these two poles of intelligent sci-fi sound like too much stress, Cowboys & Aliens is slap bang in the undistinguished middle.

Previous: The Inbetweeners Movie
Next: Bladerunner returns. Fans weep. Scott laughs all the way to bank.