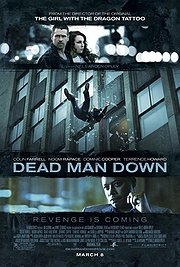 Dead Man Down, the first English language film to be directed by Denmark’s Niels Arden Oplev, reunites him with his The Girl With The Dragon Tattoo star Noomi Rapace. Allegedly a neo-noir crime “thriller” written by J.H. Wyman, Dead Man Down sank without a trace following its US release (it was pitted against Oz: The Great And Powerful), and it is now looking set to do the same here. 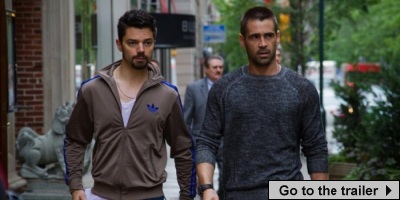 Seeking revenge for the death of his wife and daughter, Lazlo Kerick (Colin Farrell) — now going by the name Victor — infiltrates the crime empire of the man responsible, a ruthless kingpin called Alphonse Hoyt (Howard). Lazlo is forced to accelerate his plans when Darcy (Dominic Cooper), a friend from within Hoyt’s outfit, perceives a threat and begins to investigate. Meanwhile, Victor’s motivations are tested when he strikes up a romance with French neighbour Beatrice (Rapace).

With the likes of Arnold Schwarzenegger and Bruce Willis pushing retirement age, despite desperate and doomed attempts to recapture their glory days with sequels to their previous hits, it seems we have to find new tough guys to save us from the Germans, Chinese and Soviets. Sure, there’s always Batman and Spider-man to cover our backs against the super-villains of this world, but what happens when the threat is a little more…mundane.

Hollywood has so far answered with names like Nicolas Cage and Liam Neeson, but, really, who are they kidding? Both are already half way over the hill themselves. Jason Statham is good for a British gangster or two, Gerard Butler might be able to fend off Katherine Heigl or Jennifer Aniston, and Dwayne Johnson will keep the kiddies safe, but who else is there to count on when things get personal? There is another hope, it turns out, and as Dead Man Down serves to remind us, that man is Colin Farrell. 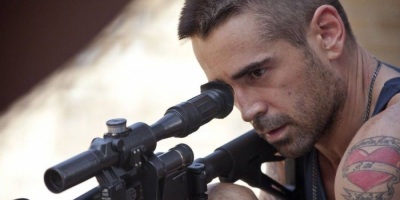 Oplev’s film is not remarkable, thrilling or even particularly memorable, but — in a year that sees (the otherwise delightful) Helen Mirren re-kicking ass in RED 2 — it is believable. Farrell even manages to convince in flashback as a bearded Hungarian engineer, demonstrating a chameleon-like acting ability that’s every bit as impressive as his physicality. While the pace at times may lag, he continues to cut a compelling figure, particularly in his burgeoning romance with Noomi Rapace’s Beatrice, a beautician by profession before she was disfigured in a car accident.

As with any film lucky enough to feature her in any capacity, Dead Man Down is at its best when Rapace is onscreen. There aren’t many laughs to be had, but it is Beatrice who occasionally manages to raise a smile (“At least it’s not my good side”), her brutal backstory and murky motivations immediately setting her apart from the typical love interest archetype. Even when she is eventually captured and used as leverage, Rapace never feels like a damsel in distress. After all, this is Lisbeth Salander we’re talking about. 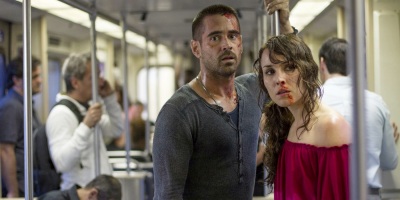 It would be easy to dismiss Dead Man Down, or, worse, deride it as dull, ill-defined and — in lighting terms at least — tediously dim. But, if the alternative is a production-line action movie starring almost literally anyone else, I’d much rather be watching Dead Man Down, even despite its many flaws.

Previous: Top 10 Films Named After Songs
Next: The World’s End poster with actual people in it