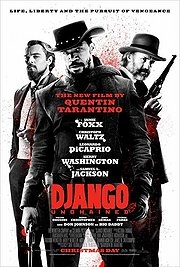 When history lessons of the future are taught in floating beige orbs by holographic memory discs and our great grandchildren’s grandchildren are tasked with pondering who freed the slaves way back in 2013, who will they say was responsible? Daniel Day-Lewis or Quentin Tarantino? Let’s not forget Steve McQueen while we’re on the subject. It’s a crowded year. With that in mind, before getting down to the nitty gritty of Django Unchained (it’s high in both), that question of responsibility is worth addressing. After all, it’s a sensitive subject.

It mightn’t be presumptuous to assume that McQueen’s Twelve Years a Slave and Steven Spielberg‘s Lincoln will opt for the inarguable north star of cinematic morality that is historical accuracy, whereas Tarantino is the guy who emptied so much lead into Adolf Hitler that the Führer’s face resembled an exploded burrito by the end of Inglourious Basterds. Not for the first time we’re in Quentin’s funhouse, and Django Unchained is about slavery as much as Inglourious Basterds was about the Holocaust. It’s all here, but those seeking a mature dialogue on American history’s darkest stain should probably look elsewhere. Does Tarantino have a responsibility to tiptoe, to paint with sensitive strokes, given how weighty and devoid of light slavery is? Let’s not instigate a round of Mankind at its worst Top Trumps, but Nazi-based comedy has its own sub-section in the world’s consciousness, slavery significantly less so. And while not a comedy, Django Unchained is even less a serious drama.

As with Inglourious Basterds, Death Proof and Kill Bill, Django Unchained is more pastiche from the undisputed master of transforming trash into art. To acknowledge the sprawling runtime is to be immediately confronted with the simple fact that Tarantino’s only responsibility is to himself. While savvy enough to drive home some brutal realities of slavery, Django Unchained is more interested in making full use of cinema’s capacity to imagine, and stands quizzically in the face of a medium too often shackled by the deified rulebook of historical fact. Slavery? Stop wringing your hands, Tarantino brazenly opines. Here’s a six-shooter. Do something about it. 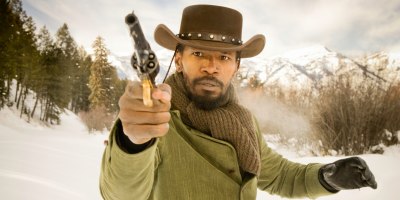 Django Unchained is part western revenge saga, part Germanic fairy tale, all Tarantino. Unshackled from a shuffling chain-gang by Christoph Waltz‘s verbose dentist/bounty hunter Dr. King (whey!) Schultz, the titular slave (Foxx) is offered his freedom and a chance to rescue his captive wife Brunhilde (Kerry Washington) – pronounced Broomhilda, natch – from Leonardo DiCaprio‘s gleefully sadistic plantation owner. In exchange, Django must join forces with the good doctor for a season of hunting the South’s worst offenders, initially as a pair of eyes needed to identify an elusive pair of slave traders. For much of the first half, that’s it. Django and Schultz ride through landscapes of expansive greenery, barren dustlands and thick snow, Tarantino extending a leisurely tip of the hat to westerns past such as The Great Silence and of course, Sergio Leone‘s Dollars trilogy. It’s a beautifully shot film, the conventions of the western obviously second language. As blood spatter hits a patch of cotton field or Django practices his draw on an obliging snowman, the elemental beauty of the sun’s glare and the sweat of beasts animal and human below drive home just how spare Tarantino has made his visual arsenal.

Despite its flair for intermittent wallops of sizzling grand guignol action, in many ways Django Unchained is Tarantino’s most restrained film in years. Perhaps in service to the statelier aspects of the western, he mostly does away with the comedic mugging of Inglourious Basterds and the stylistic tics of Kill Bill, which allows for some well-judged breathing room between Foxx and Waltz as they take the air for a good hour or so. They’re a great pair, with Foxx’s taciturn performance a perfect foil for the bout of verbal gymnastics issued by the ever reliable Waltz. The development of their friendship is sweetly played, stemming from Django’s eventual revelation that his wife owes much of her character to a positive German influence. It proves reason enough for an endearingly homesick Schultz to extend his services to a rescue mission, which provides the real red meat of the film. 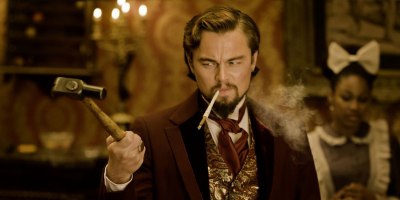 The best and worst of Django Unchained follows the duo’s journey to ‘Candie Land’, the plantation home to a couple of Tarantino’s most grotesque creations. In Calvin Candie, Leonardo DiCaprio looks to be having more fun than he’s allowed himself in years, his wealthy slaver a slimy peacock liable to mangle his way through elementary French or provide lectures on phrenology. Slimier still is his warped butler and confidant Stephen, played to the hilt by Samuel L. Jackson in full-on Uncle Tom mode. Candie’s plantation is the film’s beating heart of darkness, a shrouded velvet law unto itself. A magisterial pit of inhumanity, it’s also a point of no return at which Tarantino loses control of the reins. Candie and Stephen present a kind of terrible distortion of Django and Schultz’s partnership, and their resolute awfulness is a strange thing to watch. Each actor thrown wholly into characters too disarmingly reprehensible to laugh at, as Christoph Waltz begins another verbal slalom in a bid to extract Broomhilda – well into the film’s considerable runtime – his and DiCaprio’s extensive riffing proves exhausting.

Tarantino’s trademark dialogue is an asset that gradually turns into a flaw, as Django Unchained drowns in language, bogged down by endless speeches all tailored to the same end. Waltz’s impish candour is the main offender, his schtick of wriggling out of tight spots with flourishes of twisting oratory rather tiresome by the third or fourth go-round. There are some crackers, such as a sequence featuring a group of inept Klansmen that plays like a lost scene from Blazing Saddles, or Django and Schultz’s campfire bonding on the range. However, by the time Django Unchained is deep into its third hour, longueurs sets in and the desire for someone to just open fire instead of their mouth is overpowering. Spaghetti westerns may have been epic, but they’re also famously spare operas of space and economy, which Django Unchained achieves early, only to lose sight of in the wake of Tarantino’s unchecked and unwieldy script. 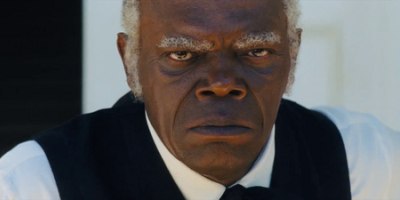 All told, though, it’s like nothing else. That Django Unchained should get a banner release, helmed by a director with seeming carte blanche to do whatever he pleases, is a reason to enthuse. It’s weighty, wobbly, overstuffed but above all singular, transcending pastiche and homage to become another inextricable part of Tarantino’s canon. Segments might certainly have benefited from being left on the cutting room floor, but their presence serves to reinforce the overriding theme of freedom – with Tarantino as unchained as the film’s eponymous hero, complete and absolute in delivering, for better or worse, the ultimate director’s cut.