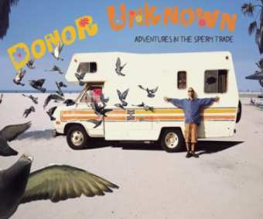 Donor Unknown is a fascinating documentary that takes us through the chance events that caused Jeffery Harrison, a beach-bum dog lover who lives on Venice beach, to discover he had rather a lot of children spread across the US.

We are introduced to the idea of sperm donations as we begin, being shown the vast baths of frozen sperm – enough to populate the world over and over– in storage at the California Cryobank. Just as you’re forced to get your head round the idea of donating sperm and what that could mean, our man Jeffrey’s voice appears over the footage: “I’ve donated over 500 times”. Geez. So how many kids could this guy have?

Donor Unknown doesn’t go about trying to find this out, but rather it looks at the story of JoEllen Marsh, one of Jeffrey’s daughters, and how she got the ball rolling in trying to connect with her father and any half-brothers and sisters she might have. After managing to find one, the New York Times ran a front page piece on the two, with the headline: “Oh hello, I’m your sister, our father’s donor 150.” Well over in California Jeffrey just happens to be reading a paper, and he remembers that he was donor 150. Not only does this get his attention, but a few other sets of eyebrows are raised around the states.

The film is gripping for obvious reasons. Children trying to find their biological father is just good material. Children trying to find their biological father who was a sperm donor is an amazing story. Add to that the fact that their father is an unbelievably intriguing guy who lives in an RV on Venice Beach, is obsessed with his dogs, is caring for a pigeon with a broken wing and has numerous epic conspiracy theories about the government using advanced technologies to control the weather and earthquakes, and you’ve got something pretty special. Oh and he used to be a model/stripper. Director Jerry Rothwell plays on this brilliantly. He sets up scenes in which the donor children’s mothers are reminiscing about what a piece of top-class specimen Jeffrey appeared to them on paper, and how they fell in love with him through his donor profile, and follows them with clips of Jeffrey putting a head band on his dog, or cooing with his new pet pigeon. He does well not to milk it though because, despite his oddities, Jeffrey is a rather loveable guy, and he is just as keen to meet his kids as they are him. The a-typical quirky music that accompanies every image, however, may wind you up after a while.

The final meetings between JoEllen, her half-brother Fletcher (just a couple in what is a group of about 14 siblings at this point) are touching and real; surprisingly restrained and delicate, rather than saccharine, emotional cry-fests. Rothwell clearly doesn’t bate anyone into making it overly sentimental. That is partly, I think, what makes the film quite unique. The meetings are awkward, slightly uncomfortable, and the kids aren’t blown away, but they want a relationship with this man nonetheless.

Donor Unknown offers a great deal of insight into how the donor registry works and how thousands of children can now find out if they have unknown siblings (one random search shows that just one man has 58 children across America!). If at times it might not be as exciting as the story suggests, it is certainly intriguing throughout. One of the most striking images from the film is the overlaying of all the kids faces on top of each other, showing just how similar they all are. That’s quite freaky stuff, when you think none of them had met before.

Previous: Tracker
Next: Jeff Bridges signs on for R.I.P.D.