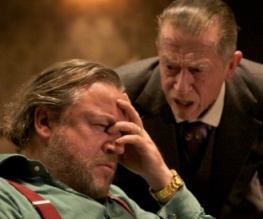 As opposed to a bunch of gangsters shooting at/stealing from/swearing towards rivals, 44 Inch Chest takes a more domestic approach. With an opening deliberately constructed to encourage multiple interpretations – and perhaps a bit of a nod to Sexy Beast – gangster Col (Ray Winstone) lies dazed in his trashed living room. We soon learn that his wife Liz (Joanna Whalley) has been playing away with a French waiter, and fully intends to leave the beardy Winstone for a life of Gallic charm and moules mariniere. Not exactly chuffed with this, Col recruits some old friends – including McShane’s camp egotist Meredith, Tom Wilkinson’s Mamma’s Boy Archie and John Hurt as the rancid Old Man Peanut – to wreak revenge on the unfortunate Lover Boy.

And so, the stage is set – quite literally. After bursting into a swanky French restaurant and manhandling the unfortunate waiter outside, we’re then driven to the wilds of the East End in which is a room, in which is a wardrobe, in which Lover Boy is quite unceremoniously locked. The gangsters – including a pining, reluctant Col – then have to decide what to do with the luckless Casanova. And the action pretty much doesn’t move from that room for the rest of the film.

And this is one of the film’s great strengths. Where many other British crime thrillers will rely on a few well-worn tropes – be it boggle-eyed revenge, theft or gruesome murder – 44 Inch Chest strips all of the gaudy set-pieces away, far more interested in presenting the characters as real people instead of cock-a-nee geezar psycho-paff stereotypes. And again, where many of the genre will go all out with their male machismo posturings – ie, you can beat any badass Eastender at their own gangster game, so long as your pair clanks loud enough – 44 Inch Chest is more interested in deconstructing and even satirising this myth of the impenetrable hard man. It’s an interesting direction to take, but one that’s not really going to appeal to those who like their gangster flicks more Scarface than Sartre.

Luckily, the characters and performances here are engaging enough to keep up the pace and humour. Ray Winstone puts in a surprisingly touching performance as Col, as indecisive as Hamlet and as foul-mouthed as a Geordie docker. And speaking of foul, it’s worth watching for John Hurt’s performance alone – a magnificent portrayal of venomous malevolence as he nudges Col towards violence more out of morbid curiosity than friendship. Depending on your point of view, some might call the direction studied, some might call it slack, though for a film that relies so much on a bunch of men sitting around a single set, the lingering shots could perhaps have been cut to a minimum.

Not without its flaws (it’s a bit saggy in places and the plot errs on the simple side), 44 Inch Chest is a careful, almost mournful character study that tries to take the gangster flick in new direction. It only partially succeeds, but some sterling performances and dialogue more than make up for the film’s other failings.

An intriguing way, to take the genre, or just an overly-talky snorefest? Leave us your comments below!

Previous: Up in the Air
Next: 2010 Golden Globes: Winners and Losers