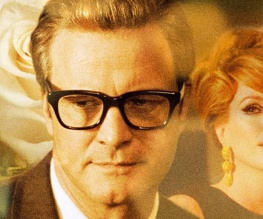 This Sunday, Colin Firth was awarded the Best Actor Bafta for A Single Man in a blaze of long overdue glory. Based on the performance his gives in this stunning, subtle, and achingly lovely film we reckon he might just clinch the Oscar.

Is Firth’s performance Oscar-worthy? Let us know below!

Previous: My Name Is Khan
Next: Odeon Refuses to Show Alice