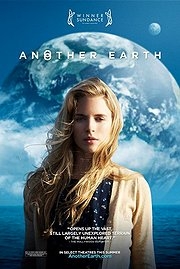 There’s been a bit of an obsession with universe-grappling films recently: Terence Malick’s The Tree of Life, Lars von Trier’s Melancholia and now Mike Cahill’s latest release, Another Earth. It’s an ambitious piece which deals with the concepts of fate, chance and the mysteries of the universe, but ultimately it’s more interesting – and has more potential – as a human drama.

Another Earth centres on Rhoda (Marling), who is seventeen and has just been accepted at MIT. Driving home drunk from a party, Rhoda hears on the radio that a planet has suddenly appeared near to Earth. Whilst leaning out of her window to search for the planet, Rhoda crashes into another car, killing a pregnant woman and her son and putting the father, John (Mapother), in a coma.

Four years later Rhoda is released from prison, gets a job as a cleaner and – after discovering that John has awakened from his coma – goes to his house to apologise. Faced with the prospect of confessing, she pretends instead to be offering a free cleaning trial. John, unaware of her true identity, takes her on and the two become friends. Running alongside this storyline is that of the mystery planet – revealed to be a duplicate Earth – a constant reminder to Rhoda that up there, things might have played out differently. Existential stuff aside, the central human drama is in itself interesting. Cahill and Marling (who wrote the script) ask, how do you begin to make up for an act that is ultimately unforgivable? Rhoda’s solution is to make John’s life better in the smallest ways. By cleaning his house, but mainly just by being another presence in his life, Rhoda helps John to recover from his trauma. It’s an interesting concept and really, the best moments in this film involve Rhoda’s relationship with John, such as a scene where he invites her to play a Wii boxing game. It’s funny and slightly awkward in a realistic way, indicating Cahill and Marling’s skill as observers of human behaviour.

Indeed, these naturalistic moments are generally very skilfully drawn. Another compelling, true-to-life scene is where Rhoda encounters an old school friend in a shop buying bottles of champagne to celebrate getting into business school. Another Earth is a film which – as seen in moments like this – examines the way in which we are constantly scrutinising our lives, wondering how things could have been. When Rhoda sees her old school friend, she is confronted with an image of her life as it should have been – which is what makes the presence of the duplicate Earth so important. Though it has its nice moments, however, the film occasionally tends towards self-indulgence. Rhoda tells John the story of a Russian cosmonaut who, driven almost mad by a ticking noise in his spacecraft, learnt to “fall in love with the sound” and hear music instead. Later, when John takes Rhoda to an empty concert hall and plays the saw for her, Rhoda’s vision is flooded with grainy images of a man in a spaceship, which – if it weren’t directed deftly – would look seriously cheesy.

It’s this occasionally overly serious, on-the-nose tone that lets the film down. At its worst, the dialogue is expositional and clumsy. At one point, John explains to Rhoda in far too much detail why he has never discovered the identity of the driver who killed his wife and son. It’s simplistic moments like this that undermine a lot of the film’s complexity elsewhere. And though Marling’s performance is good it sometimes feels, as with the film itself, a little self-important. Rhoda is ultimately too much of a martyr, too perfect – and made even more perfect by the tragic act in her past which she is constantly trying to atone for.

In trying to straddle the human story and the universal story, Another Earth opts for a po-faced, occasionally heavy-handed tone which generally veers away from humour and lightness. But at the end of the day, Another Earth is an ambitious, interesting film and has a lot of heart. 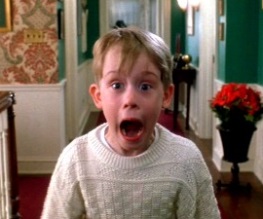