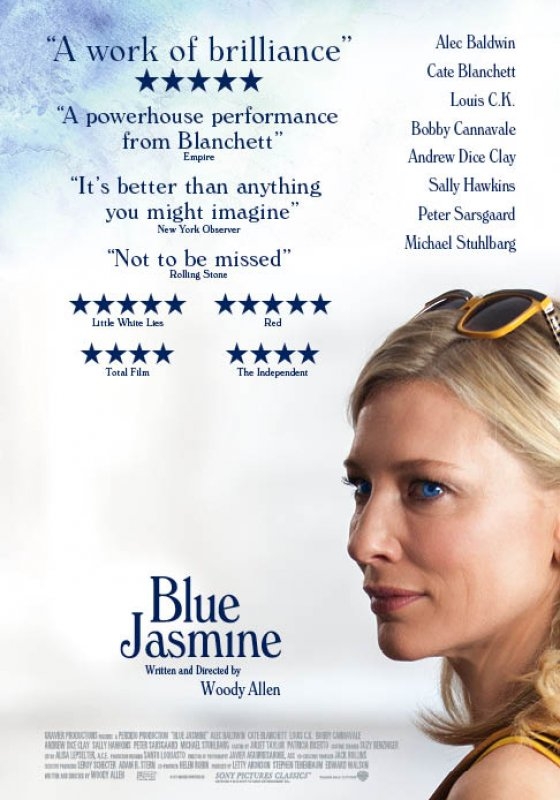 Disclaimer: I’m dipping my toes into Woody Allen. The problem with a director who makes a film a year, and has done for the past couple of decades it seems, is that for the uninitiated, tackling him can seem rather daunting. Where to start? The old stuff? His latest work? What are the hidden gems? You get my drift. So, with that in mind, please know that this review is by a man who adores Annie Hall, hated Vicky Cristina Barcelona and kinda likes Sweet & Lowdown. As I said, dipping my toes.

Jasmine (Cate Blanchett), formally Jeanette, is flying to Los Angeles to build a new life for herself in the wake of her husband’s (Alec Baldwin) infidelity / money laundering / imprisonment / suicide. She is, was, a New York socialite – the big houses, the soirees, the expensive clothes, the whole bit. Now she’s flat broke, popping Zanex like they’re Skittles and reliant on her estranged adopted sister Ginger (The really brilliant Sally Hawkins) for a place to say. Needless to say, their lifestyles aren’t exactly suited to each other, and hard though she might try, Jasmine struggles to adjust to her new surroundings and soon tries to seek a way back into her old life, all the while struggling with some fairly severe mental issues.

The film is as good a depiction of mental illness as I’ve seen onscreen. Cate Blanchett is terrific as Jasmine, she delivers every line with a kind of dilapidated joie-de-vivre, in every sentence there is regret, or longing for what once was but never will be again. Similarly the film’s narrative, which careens back and forth between Jasmine’s New York days and the present day, with little regard for linear storytelling, perfectly exemplifies her fractious state. What’s more, it is not done to convey a sense of reminiscing, a trigger from the present isn’t followed by a scene from the past, they are all directorial decisions, to do with rhythm, pace and character development. This is the film at its best, and is a world away from the plodding, achingly clichéd voiceover led arc of Vicky Cristina Barcelona.

While Blue Jasmine is an excellent portrayal of mental illness, it is also a film that couldn’t care less about mental illness. Jasmine is put through the ringer by Woody; throughout the film there is no light at the end of the tunnel, and her illness aside as nothing more than hysteria. Her sister’s brash boyfriend Chilli (Bobby Canavale) dismisses her as “cuckoo”, a scene in which she appears at breaking point at a Chuck-E-Cheese talking to her nephews is played for laughs as much as anything – and additionally, the soundtrack throughout is too jaunty and too smug to really sell the tragedy of Jasmine’s situation. Jasmine is cast as the archetypal madwoman in the attic, but one who refuses to sell her Louis Vuitton suitcases and has to fly first class. Even when she seems to be getting her life back on track with new man, would-be politician Dwight (Peter Sarsgaard with his face set to permanent smug mode), this breaks down and she is literally left alone on the side of the road. Then, just when you thought it couldn’t get any worse for her, when she’s all alone with nobody to turn to, the film, without giving too much away, sort of invites you to believe that it’s all her fault…and that troubles me.

Of Lars Von Trier, Bjork once said: “[He] needs a female to provide his work soul. And he envies them and hates them for it. So he has to destroy them during the filming. And hide the evidence.” She could be talking about Blue Jasmine. There is no doubt that this is a film full of well written characters and superb performances to the man – though particularly Hawkins, Blanchett and a nice cameo from Louis CK – but tonally, it doesn’t sit comfortably with this viewer, taking a serious issue and playing it not-so-seriously. Perhaps I’m being overly sensitive, perhaps I’ve misread it, but like I said, I’m dipping my toes in to Woody, and right now I think it could do with a little more warm water.