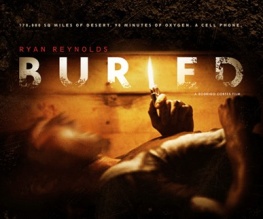 Buried, directed by obscure Spanish filmmaker Rodrigo Cortés and starring Ryan ‘Deadpool’ Reynolds, is a film set entirely in a coffin buried in the Iraqi desert. That’s the sort of thing which needs mentioning early on, because if you’ve got even a touch of claustrophobia then you probably shouldn’t even read the review of it, let alone see the film. If you’re fine with enclosed spaces, however, you MUST see Buried. Featuring a career-defining performance from Reynolds and a plot which never lets up despite its obvious limitations, this is a film which demonstrates the advantages of thinking inside the box.

It’s 2006, and Paul Conway is an American citizen working as a civilian contractor in Iraq. His convoy is attacked, and although the other drivers are shot he is preserved for a different fate. These are things which Paul finds out over perhaps the first twenty minutes of Buried, once he has begun to adjust to the film’s main conceit – he is trapped in a coffin in which he cannot move from a prone position. His wallet has been emptied, but he has been left with a pencil and a mobile phone (albeit one set to Arabic). What follows is an intensely stressful hour and a half as Paul struggles – in real time – to discover why he has been interred and who can help him. But his phone has little battery and even less reception, and every second of guttering light from his Zippo eats away at his remaining oxygen. Will Paul succumb to the demands of his captors, will the cavalry find him in time, or will his prison become his tomb?

Stylistically, the film’s primary lure is not actually its location. The way in which Cortés addresses the problems of filming in such a constricted space are certainly inventive, particularly when considering the fact that no CGI was used in creating the coffin – instead, seven different models were built with different sides cut away so the camera appears to see through the coffin from outside it. However, these practicalities are blown away by the use of lighting and sound. Throughout the film, Ryan Reynolds apparently dictates the lighting of his prison using his lighter, torch and glowsticks – the first couple of minutes are pitch black, and the lighting remains unnervingly inconstant throughout. The technical challenges of this must have been gargantuan, but they are met with style, as are the problems of realistically rendering Paul’s ragged breathing and the speech of his contacts on the surface.

The spectacle of a film where almost nothing is visible heightens the burden placed on Reynolds, as does the decision not to establish his character or any of the voices on the phone – his wife, various emergency operators of various efficiency, his boss, a hostage negotiator and finally the sinister Iraqi responsible for his captivity – with flashbacks or above-ground shots. The uncomfortably close camera angles show every hair and drop of blood on Paul’s face, which makes it even more difficult to be unable to visualise the people to whom he is speaking – he frequently doubts the truth of what he is being told, and as the film goes on it is hard to avoid questioning assumptions which had seemed reasonable mere minutes before.

The role of a lifetime

What all this boils down to is an unimaginable pressure on the one visible actor, and I was singularly unconvinced that Ryan Reynolds had the talent to carry off such a gruelling role. I have never been so pleased to be utterly wrong. Reynolds’ performance is a dramatic tour de force as he captures the panic, anger, fear and morbidity of Paul’s situation as well as lacing the script with viciously dark gallows humour. If he makes another fifty films, he will never again be so deserving of an Academy Award – and if you watch another hundred thrillers this year, I truly don’t believe you’ll find one as compelling, disturbing and perfectly made. See it.