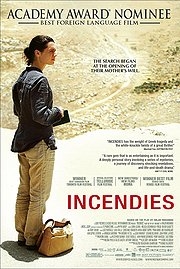 At the reading of their mother’s will, twins Jeanne and Simon aren’t too pleased to learn that in death, as in life, mum isn’t going to make things easy for them. Having believed since birth that they were the only family she had, they’re nonplussed upon being given two envelopes: one meant for their father – who they always presumed dead – and one for a brother they never knew existed. Only when this mission is completed, when their mother Nawal’s final messages to her family have been delivered will she finally be at peace and her children will be free to “carve her name in the sun”. Though Simon sullenly dismisses this seemingly impossible task, the grief-stricken Jeanne sets off instantly, jaw tight and eyes blank, determined to understand the life of the woman she thought she knew. What follows is a muscular, tightly wrought drama that unflinchingly, patiently reveals the suffering of life set against the backdrop of religious war in the Middle East. Taking two view-points: that of mother Nawal as a young woman, searching for a son taken from her, alongside that of the daughter determined to uncover the past, Incendies swings back and forth through time in order to gradually reveal the Nawal’s history. Part war drama, part sleuth-mystery, and thoroughly bloody depressing, suffice it to say that it turns out Nawal’s tale isn’t particularly sunny. Director Denis Villeneuve certainly knows how to construct a tale, and from the opening scene – a line of young boys getting their heads shaved in a soliders’ camp over a thumping Radiohead soundtrack – you’re utterly baffled and totally hooked. Though the flashbacks to Nawal’s girlhood means we have access to information Jeanne does not, the harrowing truth of their shared history is held back from us, meaning we, like Jeanne, are constantly searching for answers. Brief but maddeningly electric snippets of the climactic conclusion to come pepper the tale, meaning that no matter how seemingly endless the mournful shots of sandy roads and increasingly harrowing gunfire are, we cannot stop watching. Carefully and knowingly Villeneuve places bait in his otherwise deeply frustrating watch, ensuring that though the slow unravelling of Nawal’s story is hard-going, you’re forced to be engrossed. The problem, if you can call it that, is that Nawal’s tale is so deeply depressing, so littered with tragedy and so without hope that it’s very difficult to feel anything except vague disbelief coupled with a strong desire to stop moving forever. The dénouement in particular is just so desperately sad that, in the absence of any humour, lightness or hope, there’s very little to take from it other than a dull feeling that Everything Is Horrible. In trying to push the horrors of living in a time of religious hate, Villeneuve decides to flatten his tale into one of pure darkness, rather than providing the occasional heights from which to plummet. Incendies is no doubt a cleverly constructed, visually stunning account of one’s woman’s hardships and of the girl determined to unravel them no matter what. I just never want to watch it again, is all.

Previous: Transformers: Dark of the Moon
Next: The Tree