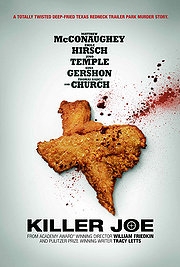 Back in 1971, The French Connection became the first R-rated movie to win the Academy Award for Best Picture. Two years later, that film’s director, William Friedkin, terrified audiences with The Exorcist. With the legacy of both films still going strong, it’s clear that when it comes to handling grown-up content, Friedkin is – at his best – a master of his craft. It may be forty years down the line, but Killer Joe proves that his fire is far from extinguished.

An adaptation of Tracy Letts’ 1991 stage play, the story focuses on a none-too-bright trailer trash family in need of some quick cash.  With Chris (Hirsch) having gotten himself into debt with a local dope supplier, he decides to visit his father Hansel (Church) with a proposition. Rumour has it that Hansel’s ex-wife (and Chris’ mother) has a $50,000 dollar life insurance plan – if they can find a way to get her out of the picture, they’ll be able to cash the cheque and split the money four ways, sharing portions with Chris’ younger sister Dottie (Temple) and Hansel’s wife Sharla (Gershon, amusingly introduced crotch-first).

Looking to enlist a local detective/hitman by the name of Joe Cooper, played by a sinisterly charismatic McConaughey, they quickly run into trouble when they discover his fee is $25,000 up front – no exceptions. That is until Joe suggests young Dottie become a form of sexual retainer for his services.  With the family uncomfortably opting to agree (albeit without Dottie’s consent), their scheme is soon set in motion – the unsettlingly calm Joe calling the shots whilst his employers nervously try their best to stay on his good side. Clad almost entirely in black, complete with Stetson and studded cowboy boots, Joe is an ominous presence. Despite being at times disarmingly friendly, there’s still no concealing that this is man who knows sin.  He serves as the perfect counterbalance to the gentle naivety of Dottie – a virgin whose only ever “boyfriend” was third grade classmate she never actually spoke to.  Small in stature and delicate in delivery, Temple endows the character with a childlike quality that could, it’s implied, be the result of a childhood suffocation attempt. The combination ensures that their courtship is an unsettling one.

Yet despite the strong potential for gloom, the film manages to retain a consistently well measured dose of comedy.  Many of the best laughs come at Hansel’s expense – from his blunt assertion that pairing Dottie with Joe “might just do her some good”, to the moment when his most dapper clothing combo of a threadbare suit and baseball cap literally comes apart at the seams. It’s only when the family’s scheme doesn’t quite pan out as hoped (naturally) that things start to get rather grisly, with a degrading scene involving a fried chicken leg leading the way in an insane-but-brilliant closing act. There have been a lot of jokes over the years about Matthew ‘look at my pecs’ McConaughey’s career choices, but you won’t be rushing to cross Killer Joe.

Previous: Taken 2 trailer is guntacular
Next: Streisand gets back behind the camera with Firth and Blanchett