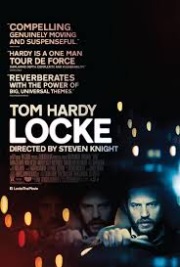 Ivan Locke (Tom Hardy) has a busy night ahead of him. A Welsh building contractor, Ivan is facing the biggest concrete delivery of his career — the biggest, in fact, to ever take place in Europe — and yet he is driving in the opposite direction, instead heading to a hospital in London to see a woman he barely knows named Bethan (Olivia Colman). Between calls to the office, where Donal (Andrew Scott) is working on Ivan’s behalf to ensure the delivery goes precisely to plan, and Bethan, Ivan also tries to contact his wife, Katrina (Ruth Wilson), who is at home with their two children (Tom Holland, Bill Milner) waiting to watch a football match with her absent husband.

There is a moment approximately twenty minutes into Locke when it becomes clear that the action is never going to leave the inside of Ivan’s car. To begin with this is reasonable cause for concern; Tom Hardy is certainly convincing as a cement expert, but as characters go it’s safe to say that he’s not the most dynamic. Eventually, however, Ivan’s predicament becomes suddenly vital, and his list of contacts transform from vague voices on the end of the phone line to complex and compelling characters in their own right.

Locke isn’t the first movie to incorporate telecommunication into its narrative — both Phone Booth and Cellular relied on characters communicating almost exclusively by phone — but in not treating this device as a gimmick the film certainly gets some points for originality. Locke isn’t about the car phone, it’s about the relationships in Ivan’s life and what each individual one reveals about his personality. The most telling conversation doesn’t even take place over the phone, but is instead an imagined, one-sided diatribe with his deceased father.

Hardy is astonishing in the role, holding his audience’s attention throughout. Ivan is for the most part calm and collected, but on occasion betrays a vulnerability and uncertainty that stems from his own father issues and his determination to redeem the Locke name. While Ivan may have accepted his predicament, those around him are far from ready to deal with the consequences. The different facets to his character make Ivan interesting, but its his frustration at everyone else that makes him so sympathetic. His bosses anger, his colleague’s confusion and his wife’s hurt all seem obscene in the calm of Ivan’s car, and you become not only invested but defensive as you see him attacked from all angles.

A high-concept thriller with a difference, Steven Knight’s Locke is sober, understated and character-driven. Don’t let the subdued atmosphere put you off, however, as Hardy’s performance ensures that it is just as tense and urgent as any other.

Previous: Captain America takes on Batman and Superman
Next: Marc Webb will not direct Amazing Spider-Man 4