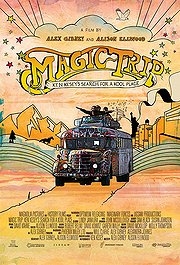 What do you get when you take over thirty hours of footage chronicling a psychedelic exodus across America, condense it down to a hundred minutes and add an unnecessary voice-over? If you said “cinematic gold”, then you are, alas, mistaken. Taking the archive footage, shot and narrated by the very people involved, and stitching it into a well-structured feature sounds like a great idea, but trying to impose any meaningful narrative here is nigh-on impossible. The year is 1964 and Ken Kesey’s an all round cool dude. He’s written some excellent books, most notably One Flew Over the Cuckoo’s Nest, and inadvertently become a guinea-pig for CIA drug trials which unlocked his mind to the wonders of LSD. Along with Neal Cassidy, hero of Jack Kerouac’s On the Road, and a group of others he dubs “The Band of Merry Pranksters”, he paints a bus psychedelic colours and heads out from California towards New York that they may all enjoy the World’s Fair.

Adventures and drugs ensue. Actually, not so many adventures. Mainly drugs. As people get on and off the bus (named “Further”) it just keeps rolling forward, much like this film. We go see the World’s Fair. We sort-of-but-not-quite meet Timothy Leary. We hear from the Grateful Dead. We see Kesey get arrested. We see him come out again. We see lots of things happen and then it ends. This is the problem: because what is being used is the footage filmed, not by camera crews or professional filmmakers, but by amateurs off their tits on LSD who filmed EVERYTHING, creating a decent viewing experience from it is tricky at best. It doesn’t help that Gibney and Ellwood are clearly in passionate love with Kesey’s Pranksters and all that they stand for, meaning that their priority seems to be to idolize the group, rather than explore the subject matter in any real depth. The footage, however, has no such agenda, highlighting the faults and pettiness of the Pranksters as much as their virtues.

There’s also an odd voice-over by Stanley Tucci, that attempts to bring some semblance of narrative to the unstructured sequence of filmed events. At the beginning this is all well and good, if a little ill-fitting (Tucci is clearly not a voice actor), until he starts interrupting archived recordings of the people involved to ask them questions. THEY CAN’T HEAR YOU, STANLEY TUCCI. MOST OF THEM ARE DEAD. Of course, the filmmakers have picked an appropriate response from the hours of recordings, but the sound quality is completely different, which is both jarring and creepy. Having said all that, considering what they had to work with, the editors and animators have done an excellent job stitching it all together. The character introductions are particularly pleasing, and as predictable as the sequences where the bus moves across the map might be, they are well-executed.

At it’s core, this is a decent film on an interesting topic, but very much like a drug trip, it was obviously far more fun to be a part of than it was to watch.

We Steal Secrets: The Story of WikiLeaks