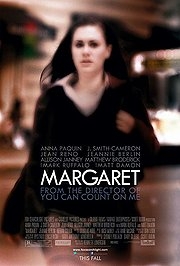 Tell someone you are going to see Margaret at the cinema and they will invariably turn to you and ask why the hell anyone would want to watch a movie about Maggie Thatcher in the first place. While The Iron Lady has enjoyed a truly astonishing amount of publicity in the run up to its release, Kenneth Lonergan’s Margaret has received almost none. A shame, really, considering that Margaret is undoubtedly the better movie, and one that you really do owe it to yourself to see. Lisa (Anna Paquin) is an opinionated and articulate teenager who thinks she knows it all. Brash, obstinate, and an indominable force during class debates, she is unafraid to tell her peers, teachers and single mother exactly what she thinks of them and the attitudes that they hold. Deciding to track down a cowboy hat in preparation for a weekend of horse-riding with her father following one such incident with an exasperated maths teacher (Matt Damon), Lisa’s shopping trip is cut short when she indirectly causes a traffic accident which kills an unsuspecting pedestrian (Alison Janney, who nobody kills without serious repercussions).

Racked with guilt over her part in the tragedy, having distracted the driver (Mark Ruffalo) and therefore causing him to drive through a red light, Lisa proceeds to make matters worse by misinterpreting a glance during questioning and lying to police in order to corroborate his story. Driven to make contact with the dead woman’s only relative by her overwhelming grief, she builds up a relationship with the deceased’s best friend and convinces herself that in order to atone for her perceived sins she must come clean to the police and remove the responsible driver from the roads. But there is more to Margaret than a straight-forward tale of right and wrong. As Lisa includes more and more people in her own personal dilemma – in either an attempt to form a moral consensus or satisfy some egocentric pursuit of drama – she inevitably finds herself doing more harm than good, often reacting to her feelings in unhealthy and unexpected ways. With such an under-formed and unreliable ethical grounding, Lonergan has the perfect medium to explore not only the impact of 9/11 on modern America but also such extraneous topics as puberty, family and the very nature of justice itself – whether legal, moral or arguably pathological. Who is at fault? What is grief? How, when the case is supposedly closed, is it possible to achieve absolution?

At the very centre of this sprawling meditation on responsibility is Lisa herself. For Anna Paquin, it is the performance of a career. It seems almost unjust to describe her performance as just that – Lonerman’s film is not populated by impersonations, but inhabited by people – beautiful, flawed, well-meaning people. As infuriating as she is inescapably compelling, Paquin’s Lisa is perhaps one of the most well-rounded and complex protagonists ever committed to film. With characters drifting in and out of her life with little thought for traditional drama, the narrative follows no laws other than those set by Lisa herself. The movie Margaret most reminded me of was Southland Tales. While Lonergan’s movie might be superior in almost every sense, it is one of those over-reaching movies that is held together not by convention and cliché but by the director’s sheer force of will alone. The five year production has taken its toll on every frame of the finished movie, but Lonergan’s determination and resolve has resulted in a movie which nevertheless survives as one of the finest films of the year. Audacious, ridiculous and utterly compelling, Margaret is a frustratingly naturalistic movie which will leave you almost as confounded as the inhabitants of its own universe.

This is unlikely the last review of Margaret I will ever write – like the film itself, my own understanding of it is a bit of a work in progress – but one week on from my first viewing I am still as yet unable to stop thinking about it. If you only see one Margaret this month, make it this one.

Previous: V&A Museum announce Hollywood Costume exhibition
Next: The Woman in the Fifth