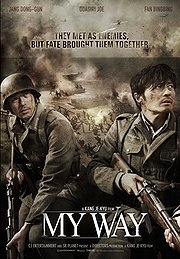 For many reasons My Way is a flawed film. It largely depends on a host of archetypal characters to propel its plot – a plot you wont have any trouble predicting – and features a narrative structure that manages to span across several continents and time periods without making any real adjustments to tone or pace. It has a preference for the needlessly emotional: constantly resorting to the use of soaring, overbearing music which wordlessly yells at the viewer, “NOW! This is where you’re supposed to feel an emotion!! FEEL IT!!FEEL THE EMOTION!!” and there is no question that Korean director Je-kyu Kang has been shamelessly indulgent with his editing; the film clocks in at just under two and 3 quarter hours long and there is a good chunk of that time that doesn’t need to be there. It is curious then, that in spite of itself My Way manages to be brilliant, beautiful and hopelessly compelling.

Poor Korean country boy Kim Jun-shik (Dong-gun) is good and wants to become an Olympic runner so he can honor his beleaguered people. Japanese rich kid Tatsuo Hasegawa (Odagiri) is bad and wants to stop him. After a ban blocking Koreans from entering tryouts for the Olympics is lifted, Kim attempts to enter, but is stopped due to the extreme prejudice felt towards Koreans living in Japan. A riot ensues which sees him unjustly conscripted to the Japanese Imperial army before he is made a prisoner of war by the Soviet Union and eventually forced to fight for the Germans at Normandy. In a cruel twist of fate Hasegawa is assigned captain of the Imperial guard and uses his new found power to continue to torment Kim. Throughout it all, Kim displays an almost superhuman dedication to realizing his dreams, matched only by Hasegawa’s bull-headed commitment to being an arsehole of the highest order.

The narrative is pretty prescriptive in presenting us with our hero and villain and to its credit it does takes a pretty decent stab at endowing the respective characters with credible motives for their actions but the attempt is redundant. The audience will have seen rivalries such as the one between Kim and Hasegawa on the big screen for years and will almost certainly know the drill. The interesting thing is: they simply won’t care. As we witness Kim Jun-shik’s tireless attempts to see his dreams come to fruition being constantly hindered by Hasegawa’s dogged determination to see him fail, the film doesn’t allow the viewer any other option but to buy into Kim Jun-shik’s story and consequently want him to succeed for the simple reason that the story of an underdog never has and most likely never will lose its appeal. 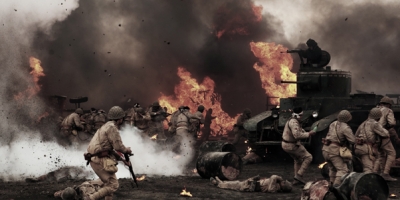 The film truly excels with its stunning imagery, the majority of which can be seen in the brutal battle scenes – of which there are many. My Way features a relentless string of gory high octane action scenes which are so frequent as to become numbing. From start to finish the film sustains a constant level of tension from which there are very few opportunities for reprieve. However, the autumnal colour palette and skilful editing used to present some truly stunning shots functions as a form of tempering and is particularly striking in its use of aerial shots. There are also some really affecting sequences which explore the Japanese army’s complete, unquestioning allegiance to their Emperor and how that conflicts with the Korean soldier’s resentment at fighting a war for a nation that has sought to oppress them.

Ultimately, it is the relationship between the two leads and how that relationship comes to grow and transform over the years, that will compel the audience to continue watching. In order for audiences to get behind a narrative that has been done to death, the acting needed to be superb and thankfully it is. Special mention must be made of Kim’s childhood friend Jong-Dae (played brilliantly by Kim In-kwon) who best portrays the horrific psychological impact of the war. All in all, the strange blend of melodrama and brutality that can be found here, is just special enough to warrant a watch. Whilst My Way is not a perfect film by any means, it perfectly manipulates the audience’s emotions to the extent that they will graciously overlook its flaws.

Previous: Tom Hanks and Michel Hazanavicius to team up for Nazi drama
Next: New Godzilla film slated for 2014 release