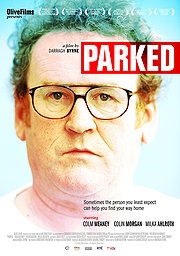 You might expect that a film bearing the tagline ‘Sometimes the person you least expect can help you find your way home’ would be a heartwarming tale of a friendship, possibly involving a dog. But don’t let its corny tagline and chirpy soundtrack fool you; Parked is ultimately a grim, serious examination of a life lived in poverty, and alone.

Parked tells the story of Fred (Meaney), a middle-aged watchmaker from Dublin who – finding himself unable to get benefits or housing due to the bureaucracy surrounding social welfare – resorts to living in his car (something you might have been able to guess from the very literal title). Into Fred’s life appears Cathal (Morgan) a young drug addict estranged from his family and also living in his car. The two bond over their shared loneliness, with Fred stepping in as a father figure for the wayward Cathal, and Cathal helping to awaken a rebellious side in Fred – mainly by forcing him to go dirt-track driving.

Fred meets a lovely Finnish lady, Jules (Ahlroth), at the swimming pool while she is doing some water aerobics (we all know that’s a great way to meet hot babes) and they bond over clocks and their sad, lonely lives. Meanwhile, Cathal gets tangled up with some drug dealers and heads for disaster, despite Fred’s attempts to intervene and set him back on track. Meaney’s portrayal of the likeable Fred is solid, if not particularly interesting. But the superior performance belongs to Morgan, whose pale, hollow-cheeked intensity lends itself well to the heroin-addled Cathal (although his “I’m a junkie” face-twisting occasionally resembles Vincent D’Onofrio’s “I’m an alien” face-twisting in Men In Black).

Overall, Parked is a film which is good on the small things. From Cathal’s horrid brown teeth (I really hope those aren’t Morgan’s real ones) to the daily routine which Fred goes through every morning – brushing his hair, brushing his teeth, watering his little plant – Byrne and writer Ciaran Creagh have done well to depict the minute details of a life lived without money or friends. Fred’s rituals obviously act as a way of maintaining some semblance of normality and when that normality is lost – as has happened to Cathal – the chaos and despair are allowed to boil over.

Sadly, however, the nice moments in this film are often overwhelmed by the soundtrack, which lurches between twinkly uplifting piano chords and music which can only be described as the ‘Demo’ track on an old Casio keyboard. It’s a shame, because for a large portion of the film, the dialogue is well-observed and nicely acted. Having said that, Parked also tends towards the occasional cheesy line. At one point, Cathal asks Fred thoughtfully, ‘Have you ever seen a leaf fall off a tree?’ evidently indicating that Cathal is really quite a philosophical soul who has fully functioning eyes. Similarly there’s a bit of an obsession with on-the-nose clock metaphors. Fred fixes Cathal’s watch and later Jules’ antique clock – which apparently stopped working after her husband died (psychic clock alert!). Fred mentions that it must be over fifty years old and Jules looks back at him pointedly and replies ‘The older ones have real character’ (i.e. Fred = clock). It’s clunky moments like this, accompanied by the irritating soundtrack, that pull the film towards mediocrity.

In the end, Parked saves face by avoiding anything too heartwarming. It’s really quite a hard watch at times, and is unexpectedly rather depressing. Darragh Byrne has done well to depict the hardships of this kind of life, and deserves credit for attempting to give a voice to those people who are prone to fall through the cracks. But Parked could have made more of an impact.