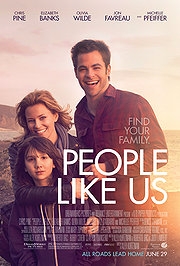 Sam (Chris Pine) is a fast-talking businessman who gets into a pickle when he severely annoys the FDA. Before he can deal with the approaching storm, his father dies after a long battle with cancer. As part of the will, Sam is given a shaving bag with $150,000 in cash in it, and instructions to deliver the money to a certain Josh Davis. Discovering that his father had a second family, Sam is shocked to find that he has a half-sister, Fankie (Elizabeth Banks) and that Josh Davis (Michael Hall D’Addario) is his 11 year old nephew. He proceeds to befriend them whilst concealing his identity. How long can he lie to his new-found sister before the truth comes out?

People Like Us is a deeply personal project from director and writer Alex Kurtzman. This is his first foray into directing a feature film, but he has a large body of work as a screenplay writer for big-budget action.  People Like Us is definitely a departure for Kurtzman’s usual style. The film claims to be “Inspired by true events” – Kurtzman was 30 years old when he met his own half-sister for the first time. As he tells it, he came up with the basic idea of the film in a single day. Later that evening, he attended a party where a woman came up to him and introduced herself as his sibling.

His sister’s decision to introduce herself to Kurtzman seems completely understandable. Alas,  People Like Us slaps Kurtzman’s autobiographical account to a rocket bound for space. The fact that Sam ingratiates himself into Frankie’s home life without ever telling her that they share a father has been a sticking point for many. 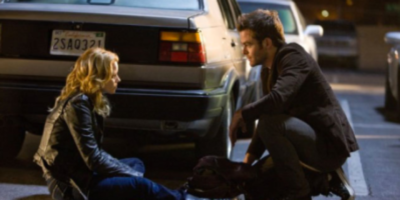 This absurdity does not break the film. It is definitely odd: as you watch the film you cannot help but scream in your head “Tell her! Tell her now… No, Chris Pine what the hell are you doing!?” at pivotal moments, but the film just about gives you plausible deniability. Sam’s grief at the loss of his cold and distant father takes a rather self-destructive form. He ignores warnings from his work back in New York and the FDA, and spends time drinking heavily and attacking his father’s record collection. If a film manages to get you invested, one can usually overlook the glaring elephant in the room. So it is with People Like Us.

More egregious is how the film opens. The first 5 minutes of the People Like Us is completely distinct. A smarmy and unlikable Chris Pine schmoozes potential clients into signing up with his “barter” company and, although interesting, it’s a complete non sequitur. Perhaps the film was attempting to setup a distant tension throughout the rest of film as Sam ignores his mounting legal and financial problems, but it doesn’t pay off. By the end of the film, these problems aren’t even resolved. One suspects that Kurtzman had a script lying around about a barter company and didn’t know how to use it, so they shoved it in People Like Us. Whatever the intention, it just doesn’t fit. 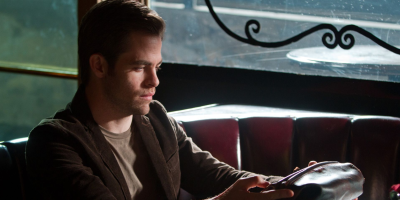 The performances throughout are fantastic. Michelle Pfeiffer, as Sam’s mother has some fantastic moments. Olivia Wilde‘s acting gets a little lost in her absurd beauty, but she does a great job with the limited amount of time she has on screen. Chris Pine starts off completely unlikable, but his confused and earnest performance as the film progress makes you really warm to him, even when he making unfathomable decisions. The best performance by far, however, goes to Elizabeth Banks in the role of Frankie, who utterly steals the film. Her stressed-but-caring former-alcoholic single mother is wounded, strong, capable and vulnerable. One scene in particular, when the truth about Sam’s identity comes out, is astonishing. Elizabeth Banks has been rather middling as an actress, never doing a bad job but also never given a real chance to shine. This is her moment. 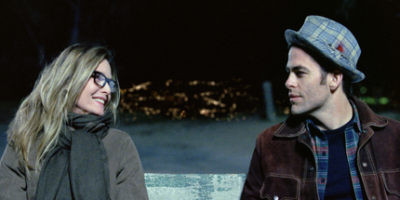 Although the film starts off juddering and spluttering, People Like Us does an excellent job to reel you in. The lives of the characters become as important to you as your own. The film concludes in a sweet, schmaltzy fashion, and while it really is rather lovely, it was also a chance for the film to be brave in tackling the issues of an estranged father. It doesn’t take this chance, which is unfortunate. Sam and Frankie’s dad is portrayed as unloving, distant, almost cruel, but People Like Us almost attempts to excuse this behavior. Despite all appearances, he really was a loving father, but he was a victim of circumstance. In a world full of callous fathers who have ignored or abandoned their children, this resolution, although pleasant and flowery, falls a little hollow. On the other hand, the final shot of the film is undeniably beautiful. 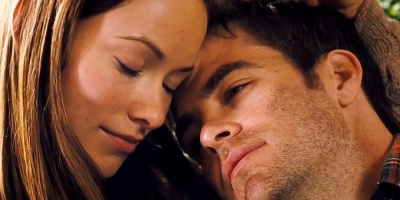 People Like Us will take you by surprise. Sam’s irrational stalking of his sister will appear to many to be a recipe for disaster, but Kurtzman has created a wonderful film despite its flaws, and the performances by the entire cast just make the film shine. Considering this is Alex Kurtzman’s first attempt at directing, you will want to keep a very close eye on his career as he branches out from writing screenplays for sill big-budget movies. People Like Us is a perfect checkmate for modern cynicism.

Previous: Tom Hardy is Sam Fisher in Splinter Cell: The Movie
Next: Channing Tatum is the sexiest man on the planet