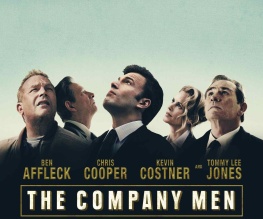 In Up in the Air, George Clooney plays a man whose unenviable job is to travel from ailing company to ailing company and swing the dispassionate axe of ‘downsizing’ when managers lack the courage to fire their own staff. The Company Men could be set in any one of the firms which Clooney’s character visits. Set in 2008 and -9, it follows the fortunes of three men whose jobs are threatened by the incipient recession and their very different reactions to the increasingly hostile climate in which they had previously lived charmed lives.

Bobby Walker (Affleck) has got it made – a senior executive position with $160k a year, a nice house, a Porsche, a steadily improving golf game and, when he remembers, a young family. He knows jobs are threatened at his company but never considers the possibility that his neck could be on the block – never, that is, until he arrives at work to find a pink slip and a severance package waiting for him. Incapable of admitting his plight to family and friends – particularly his brother in law (Kevin Costner), a builder with little tolerance for high-flying execs – Bobby conceals the truth and frantically hunts for a new position, all the while trying to maintain a veneer of success which suddenly seems to cost a lot more than it ever used to.

Meanwhile, his old boss’ straight-talking hatchet man Gene (Jones) is finding himself increasingly alienated from a corporate world in which abrupt mergers, asset stripping and rampant downsizing are all fair game in the struggle to stay afloat. His insistence on awkward truths over convenient lies is doing him no favours with the Board, whilst Bobby’s colleague Phil (Cooper) is horribly aware that if his job is threatened he may be too old to find another. All this is a blur to Bobby, but as position after position passes him by he is forced to recognise the uncomfortable reality of his situation – his job was great while it lasted, but maybe the salary and the car weren’t worth the other sacrifices he had to make to get them. The Company Men’s lead characters tread an odd road which cannot immediately expect our sympathy – whilst they represent the human cost of the recession, they are also the smug and hideously overpaid businessmen we’ve been taught to hate by years of vitriolic editorials. Why didn’t Bobby squirrel away more of his huge salary? Did Phil really need quite such an opulent office? What the devil is Gene doing letting his wife spend $16,750 on a sideboard? The top billed cast’s great triumph is their successful transcendence of this barrier, creating characters who can be empathised with despite their privileged backgrounds. Ben Affleck is particularly memorable as the committed and driven young man who, one worries, may have realised too late that he was committed to the wrong things, but it’s always a pleasure to see Tommy Lee Jones in a role that has nothing at all to do with aliens. Kevin Costner’s supporting appearance as the acerbic working man, ever ready for Bobby with a barb about sweat shops or forced labour, is nicely developed but could have done with more screen time.

The cinematography is intelligent and subtle, with the increasingly bleak and wintry weather mirroring Bobby’s fruitless quest and thoughtful long shots highlighting the polarity between the gleaming offices of the Company and the abandoned industrial plants which had supported it in Gene’s heyday. The script (written by first time director John Wells) is thoughtful and largely devoid of tiresome white-collar-film clichés, and a muted score serves to accentuate the terribly mundane reality of the Company Men’s abrupt change in situation. It’s very easy to talk in sweeping terms of fat cats and banker wankers; for every film like Wall Street: Money Never Sleeps, we need at least one The Company Men to remind us how fragile and meaningless the boundaries of wealth really are.