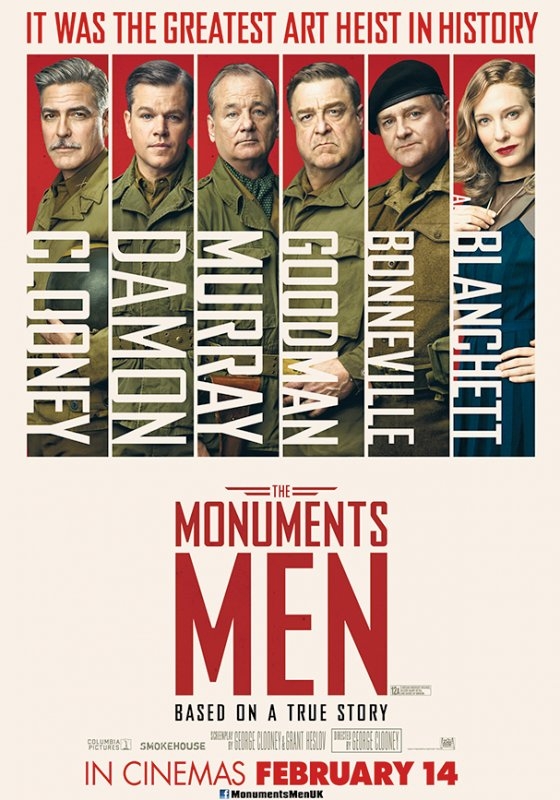 The Monuments Men ticks all the boxes for Oscar bait. George Clooney is the star, co-writer and director. Hugh Bonneville’s in it, so is the legendary Bill Murray, and also Cate Blanchett who excels at everything she does. Oscar winner Jean Dujardin is a welcome addition to any film. It pits American heroes against Hitler, the M Bison of movie baddies. On paper, The Monuments Men should be this year’s Inglourious Basterds – but it falls woefully short.

The good stuff first. From romantic, chintzy Parisian cafes and apartments to desolate German mines and a cosy British pub that’s all leather and wood and good cheer – Europe looks bleedin’ beautiful, it’s enough to make you round up some friends, hire a car and hit the open road. Costumes have had a painstaking amount of thought put into them, right down to the tie – black and white pattern with a bright lick of passionate red hidden underneath – Blanchett’s beautifully understated Claire gives to Matt Damon’s married James as a way of flirting with him.

The iconic pieces of art salvaged from Nazi hands (the Mona Lisa, a Van Eyck altar piece, Michelangelo’s Madonna and Child) are characters as much as our heroes, described in detail and worshipped with lingering shots. An evident love of art runs through all the main characters, you can believe that Frank Stokes (Clooney, failing to better his storming performance in The Ides of March) and his band of merry men will willingly sacrifice their lives for it, which two of them end up doing. Speaking of which, a death scene in the back of a van provides the film’s most moving shot, more so than the sight of the US flag waggling in the breeze at a defeated Russian army, which I somehow don’t think was Clooney and co’s intention.

The script sparkles with Ocean’s Eleven-style wit and at times is darkly funny (the landmine joke from the trailer is way funnier in full), and there are flashes of heart-breaking emotion thrown in in the form of Richard Campbell (Murray on fine comic form) breaking down while hearing his daughter sing on a vinyl record miles away from the conflict.

There is only one negative, but sadly it’s one that blights the film as a whole. Stokes asks at one point “With thousands of people dying, who cares about art?”, and that’s precisely The Monuments Men‘s flaw. There’s an air of “so what?” about it all. Burning art in heaps was not Hitler’s biggest crime against humanity, and his biggest crime against humanity is only brought up in the last forty-odd minutes by way of a barrel of gold human teeth and a brief interaction between Frank and a concentration camp screw.

While the line-up has box office pull there isn’t much else that The Monuments Men has going for it. Performances are strong throughout, but it’s down to the calibre of the cast and not the director, sadly; and while certain audiences might enjoy the idea of all-American heroes storming in to far flung countries and kicking ass, it’s a thoroughly overused trope. This film is basically Team America: World Police minus the big laughs, puppet sex and musical numbers. It does have Matt Damon, though.