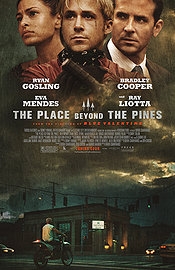 The Place Beyond the Pines marks writer-director Derek Cianfrance and actor Ryan Gosling’s second film together and yet, judging solely by the trailer, it would be easy to see this as quite a departure from the pair’s previous collaboration, Blue Valentine. With images of guns, police chases and broad forest vistas, its marriage of moral ambiguity and expansive scope suggests a focus altogether larger than the domestic drama of its predecessor. One of film’s posters, however, tells a different story. A picture of Gosling’s character sitting outside a house and bottle feeding an infant, its simplicity penetrates right to the plot’s core. The Place Beyond the Pines may reach further than Blue Valentine, but its heart remains the same. This is another story about family; a bond that brings people together, but can also tear worlds apart. 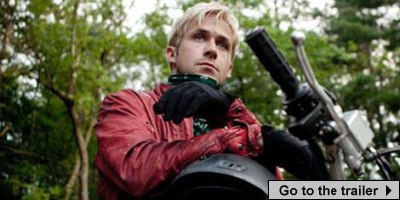 For motorcycle stunt rider Luke (Gosling), family provides a purpose. Initially portrayed as something of a loner, Luke’s life has mostly been spent moving from one city to the next as part of a travelling carnival. But when a stop in Schenectady, New York, sees Luke run into past fling Romina (Mendes), everything changes. Discovering that he is father to Romina’s baby boy, Luke decides to give up life on the road in order to do right by the child. Yet with his new-found son’s mother happily settled with another man and Luke possessing little in the way of employment prospects, he soon finds himself turning to crime in an attempt to prove his worth.

With a plot that spans across fifteen years, what follows examines the impact of one man’s desire to provide for his son, no matter the cost. Weaving Luke’s story together with that of ambitious beat cop Avery Cross (Cooper), as well as two high school students played by Dane DeHaan and Emory Cohen, the film plays out as an epic of crime and consequence – and, for the most part, it works. True, convenient parallels between Luke and Cross may mean that Cianfrance’s themes are not always subtle, but by making use of a gradual and absorbing storytelling he allows ideas to ebb through the script in a manner that feels both natural and compelling. Back this up with some great performances, not only from the central players, but also the supporting cast (Ben Mendelsohn stands out as Luke’s bank robbing accomplice, whilst Ray Liotta is the perfect asshole cop), and you’ve got something genuinely special on your hands. 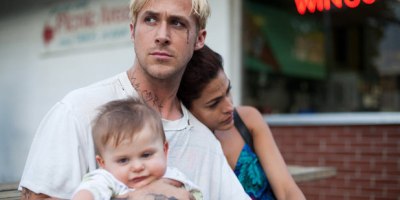 Where matters do falter, however, is in the final act. With the majority of the film showcasing a deft ability to switch between plotlines without signposting, there’s something about a “15 years later” title card appearing on screen that immediately seems jarring. The slow-burning and reflective style somewhat jettisoned, the story doesn’t necessarily become less interesting, but it does become less nuanced, with one sequence even seeing some overly dramatised detective work conducted via a basic Google search. Yet with the closing minutes offering thoughtful observation on the theme of nature versus nurture and tying up enough strands to make for an effective conclusion (a final encounter with Mendelsohn proves particularly moving), the epilogue is required, just not remarkable. Indeed, despite a 140 minute runtime, the problem here is not that the material feels superfluous, but that it feels squashed. In the end, the film and its protagonist both suffer from the same problem – each of them possesses an innate desire to provide, but neither of them has enough means to do so.

Previous: Top 10 Worlds of the Future
Next: Drinking Game #80 – Presidents