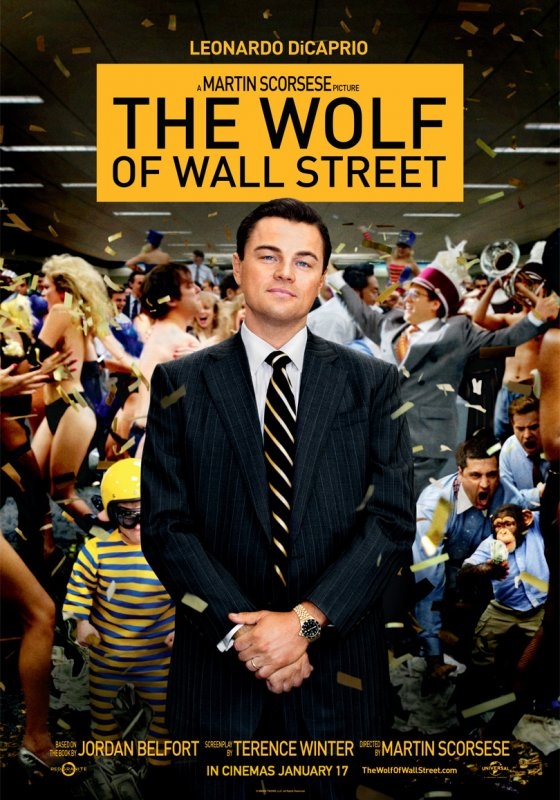 Hired by Mark Hanna’s (Matthew McConauchey) Wall Street firm in 1987, Jordan Belfort (Leonardo DiCaprio) takes his boss’ teachings — especially those concerning cocaine and casual sex — to heart only for the business to fail following Black Monday. Unemployed, Belfort takes a job in Long Island, this time dealing with penny stocks. He makes a small fortune on commission, and, using his aggressive sales technique as a template, starts up his own company with Donnie Azoff (Jonah Hill), making a triumphant return to Wall Street where he marries Naomi Lapaglia (Margot Robbie) and ultimately falls foul of FBI Agent Patrick Denham (Kyle Chandler).

There’s a good chance you won’t understand The Wolf Of Wall Street, but then you aren’t really expected to. Despite all the talk of penny stocks and securities fraud, DiCaprio and director Martin Scorsese make a point early on of excusing your ignorance. Based on the real-life Belfort’s memoir of the same name, the film may hold some interest for would-be stockbrokers but is first and foremost a black comedy about greed and corruption. Belfort is a bad man, you see, whether you can fully comprehend his crimes or not.

DiCaprio gives the performance of his career as the titular wolf, both convincing as a charismatic motivational speaker and committing unreservedly to the darker aspects of Belfort’s character. Whether giving speeches or snorting cocaine, the actor plays the role with confidence and credibility; he’s a vile, repugnant individual, but it’s not completely impossible to see why so many might have bought into his scam — at least at first. By the time a drugged up Belfort is seen to throw himself down the steps of his golf club towards his car, you would give just about anything to be out of his company for good.

The supporting cast provide little respite from Belfort, with most of the characters sinking willingly to his level. Hill is horrible as Azoff, though I mean that in the best possible way. While Belfort tries to lift his lifeless limbs into his sports car, Azoff — also off his face on Quaaludes — is using a tapped phone line to incriminate himself and Belfort while speaking to an associate in Switzerland. The only half-respectable characters in the film are Naomi, who straightens out once she’s had a child, Naomi’s aunt (though that’s largely because she’s played by Joanna Lumley) and Denham, who can’t persecute everyone else quickly enough.

While stylish and visually interesting throughout, however, there are some decisions that work better than others. The depravity is fun to begin with, and the first couple of orgies certainly make an impact, but before too long you’re sick of looking at naked people taking drugs. It all becomes a little repetitive, and as you don’t particularly care for anyone involved there is less and less to engage with. Other scenes fail completely: McConaughey has given some great performances in recent years, but is here reduced to beating his chest and bearing his teeth, while an ill-fated yachting trip to Monaco feels like it’s been washed in from a different movie altogether, on a wave of pixels.

The Wolf Of Wall Street is a remarkable movie. It’s by turns funny, provocative and completely insane, and boasts a truly outstanding central performance. While Scorsese might have done the right thing by refusing to humanise Belfort, however, it leaves his movie adrift and inaccessible. His wolf can huff and puff, but he can’t quite blow you away.