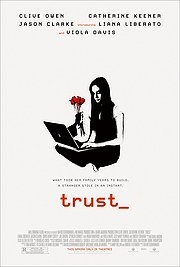 Having taken on a much lighter, comedic film in Run Fat Boy, Run for his directorial debut, David Schwimmer has gone down a much darker road with drama/thriller, Trust.

The premise is this. Fourteen year-old Annie (Liberato) meets a sixteen year-old boy named Charlie online. Later he suspiciously bumps his age up to twenty, then twenty-five. When they finally meet Annie is annoyed to find out he is actually thirty-five, but she’s naively delighted when he showers her with compliments. He manages to convince the teen that the age-gap doesn’t matter and she falls prey to his charms. After revealing her encounter to her best friend Brittany (whose concern leads her to tell the police) Annie is forced to help the F.B.I try and trap Charlie. Her father Will (Owen), who’s insane with anger also starts his own obsessive investigation into his daughter’s relationship, which in turn puts strain on his own relationship with his wife (Keener). Keener’s portrayal as Annie’s mother is spot on. Her battle with having to support her daughter AND her obsessive husband is brought across perfectly and her pain as a mother was evident. Owen on the other hand may have struggled a little bit with such a role. He has the extreme anger bit down to a tee but when it comes to being concerned or worried, it’s just not very believeable. It wasn’t until he opened up to Annie at the end that we really believed his love for his little girl, but by then it was too late.

Now if anyone steals this show it is Liana Liberato. Now fifteen years old, newcomer Liberato was in fact the same age as her character Annie when filming this incredibly controversial story. To be able to act the part and act it as well as she does takes an extreme level of emotional maturity, the kind that you would not expect to find in a fourteen year old girl. Her performance is effortless and believable, from her mannerisms when she thinks she is in love, to her uncomfortable posture when she knows something is not quite right. The way the film is shot is unusual and clever, as any scenes of sex and violence are not shown in entirety but more as thoughts within the characters heads. There are flashes of images and daydreams that if shown as a full scene would be considered to be mighty explicit, but Schwimmer cleverly incorporates them in this way so that we don’t become so uncomfortable that we want to leave the room, but we also gain a visual insight of the thoughts and feelings in the characters’ heads.

Where that is a definite plus for Schwimmer’s directorial abilities, I can’t help but feel just a little let down by the script. Given the subject matter I don’t think that the script packed enough punch to really send the message home and make an impact.
But overall as it is such an unbelievably difficult topic to cover, and even though we will now never be able to shake off that creepy crawly feeling when someone we don’t know adds us on Facebook, we take our hats off to you Ross from Friends. Bravo.

Previous: The Thing gets first trailer
Next: Horrible Bosses